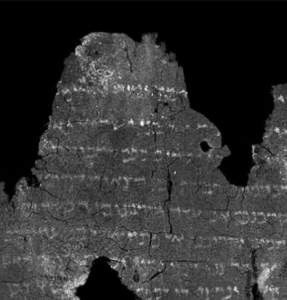 The burned scroll from the 1st centuries C.E., found to contain Torah verses that are identical to modern versions, was deciphered using unprecedented digital technology by American researchers along with a team from the Hebrew University of Jerusalem.

Cutting-edge digital technology has brought a charred ancient Torah scroll dated to the first centuries C.E. back to life, and revealed that the scroll contains chapters from the biblical book of Leviticus.

The scroll was discovered over 40 years ago during excavations by the Archaeological Institute at the Hebrew University of Jerusalem at the ancient Ein Gedi synagogue, on the shores of the Dead Sea in southern Israel. The late professors Dan Barag and Ehud Netzer, as well as Dr. Sefi Porath, were in charge of the project.

For decades, the scroll could not be opened, for fear it would crumble when touched. About a year ago, archaeologist Pnina Shor, head of the Lunder Family Dead Sea Scrolls Conservation Center at the Israel Antiquities Authority, decided to conduct a CT scan on the scroll and submit the results to an expert in digital analysis of ancient texts, Professor Brent Seales of the University of Kentucky, to see if any digital methods were available that could allow the scroll to be deciphered without opening it.

Seales threw himself into the challenge and successfully recreated the first few layers of the charred scroll. The unprecedented achievement is the fruit of close cooperation between the American team of researchers, the IAA, and a team from the Hebrew University of Jerusalem.

“Seales’ scientific achievement is of immense importance, and we were privileged to receive a ‘new’ scroll from the Judean Desert, which offers another way of understanding how the wording of the Bible as a whole evolved, and how the wording of the Torah in particular was handed down,” said Professor Michael Segal, head of the Hebrew University Bible Project.

The reconstructed Leviticus text is identical to the text in later versions of the Bible.