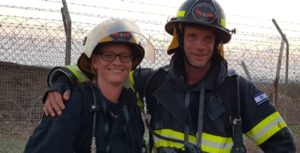 With the estimated 100 fires that the Palestinian incendiary devices created along the Gaza border last week alone, Raymond and Mirjam Reijnen returned to be professional firefighters on their Gaza border kibbutz, as they were in the Netherlands before immigrating to Israel.

Raymond and Mirjam Reijnen fight fires lit by Gaza balloons so often, that a rolled up volunteer firefighters’ uniform, a mask, and a pair of boots are permanently stashed outside their front door in Kibbutz Nahal Oz.

“Firefighters here have their suits outside,” Raymond said.

“There is no time to search for your things,” said Mirjam, adding that in their case they have only one, because “we wear the same size.”

Mirjam and Raymond Reijnen from the Netherlands are part of the Nahal Oz volunteer fire force created to fight the Gaza fires. – Photo: Courtesy

In the parking lot by their house is a white Chevrolet with a small attached wagon that carries a 1,000-liter drum of water with a hose.

The couple worked as professional firefighters in the Netherlands before immigrating to a southern border Kibbutz with their three small children on March 25, 2018.

It was just five days before the weekly violence began along the Gaza border at the start of the March of Return.

Already on their first evening they heard the warning sirens. “Neighbors came by and said, ‘Oh, it’s nothing,’” Raymond recalled.

Of course they knew that violence was possible, his wife said, but they were not so concerned because it had been quiet for four years before their arrival. Now they have as much experience as many of the veteran kibbutz members.

This includes the mortar that fell on their home in May, but the family survived because they were in a safe room.

In one scary moment in November, one of their sons was stuck outside during a warning siren, and they had no way of knowing where he was.

By the time they truly understood that they lived in a low-level war zone, it felt too late to relocate, particularly after they had just uprooted their whole family to come to Israel.

“When you make aliyah, it’s not so easy to say, ‘let’s go somewhere else,’” Raymond said.

Mirjam said their children have asked why they moved to a place of rockets, and how they responded by explaining all the unique things about living in Israel, and the South in particular.

Plus, he added, when there is no Gaza violence, “it’s great here.”

Wearing a white T-shirt, shorts and flip-flops, he spoke in a low, slow voice as he sat with his wife on the front porch of their home on a Sunday evening so quiet, it was hard to imagine that rockets and mortars could fall right there.

But the family’s 2018 arrival was eerily timed with the start of a new phase of Gaza-Israeli violence – incendiary balloons – that damaged thousands of acres of fields and forest in the South, including those that belonged to Kibbutz Nahal Oz.

Initially people in the kibbutz came to them because they knew their background, although Raymond formally switched professions upon arriving in the kibbutz and now works in the dairy farm. Mirjam found a firefighting job with the Israel Nature and Parks Authority that opened as a result of the incendiary balloons.

Out of concern for their children, only one of them will fight fires at a time.

Raymond Reijnen and his wife Mirjam by their kibbutz security fence. – Photo: Facebook.jpg

When the incendiary kites were first launched, the kibbutz did not have any kind of fire-fighting vehicle. People were so unprepared, Mirjam recalled, that they raced out to fight the fires “in flip-flops and shorts. It was not a good choice.”

Since then the National Fire and Rescue Authority organized volunteer firefighting squads on the border kibbutzing and communities, Raymond said, and the official fire truck can only head to the scene after an official call from dispatch.

“But we just drive into our own fields and extinguish it,” Raymond said.

From the start, he and his wife were involved in fighting the fires in Nahal Oz on a volunteer basis, modern day Hans Brinkers holding the line on Gaza violence one fire at a time. In the last week alone, it is estimated that Palestinian incendiary devices created 100 fires along the Gaza border.

A silver lining to the violence, they noted, is that it made it much easier for them to integrate into kibbutz life.
“It was a great way to mingle into society, to get to know everyone, to be of use,” Raymond said.

They have noted a rhythm to the violence, which they said often increases as the week moves along, with Sunday often the most quiet of days.

Over the last year, Raymond said, the incendiary devices have become more sophisticated and dangerous – initially there were kites, or a balloon with a petrol-soaked sponge, which didn’t travel far, which is why many of the initial fires occurred in border communities, such as Nahal Oz.

Now they arrive as clusters of balloons, with explosive devices – he said there was one with a warhead from an anti-tank missile. One balloon cluster alone is now designed to start six fires, he said.

There was a point where the government reacted to the balloons as if they were terror attacks, but now it has a more tolerant attitude to the balloons.

“As long as the government is not taking action, they will not stop,” Mirjam said.
“Why should they stop?” Raymond added.

When they heard the news on Friday that calm had been restored to the Gaza border, they thought it was a joke.
“I think it [the situation] will only get worse,” said Raymond.