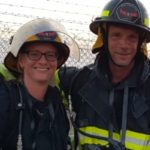 With the estimated 100 fires that the Palestinian incendiary devices created along the Gaza border last week alone, Raymond and Mirjam Reijnen returned to be professional firefighters on their Gaza border kibbutz, as they were in the Netherlands before immigrating to Israel.

Raymond and Mirjam Reijnen fight fires lit by Gaza balloons so often, that a rolled up volunteer firefighters’ uniform, a mask, and a pair of boots are permanently stashed outside their front door in Kibbutz Nahal Oz.

“Firefighters here have their suits outside,” Raymond said.

“There is no time to search for your things,” said Mirjam, adding that in their case they have only one, because “we wear the same size.” Continue Reading »