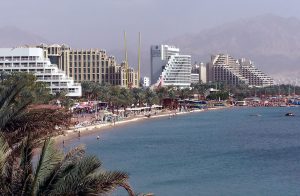 As Israeli authorities begin looking for a venue for the 2019 Eurovision Song Contest, the southern resort city of Eilat is stepping up its efforts to be chosen as the host.

While Jerusalem or Tel Aviv are the likely favorites to host the competition this time around, under the European Broadcasting Union’s rules, a final decision will be made after an official tender is issued and cities submit their bids.

According to a source involved in the Eilat bid, the city hopes to convince organizers it is up to the task by constructing a new arena in its port. The plan would see the creation of a large performance hall through the merging two hangars totaling some 86,000 square feet.

Such a rapid repurposing of buildings is not unheard of. Azerbaijan built a dedicated arena in less than a year ahead of the 2012 contest. Two years later, Denmark also converted a shipping yard into a performance hall in less than 12 months.

Officials believe its relatively high concentration of hotels gives it an advantage. “Everyone is talking about how the city has no arena, but they forget that building hotels is slightly more complicated than building a concert hall,” the source said.

The city also has other advantages: The EBU requires the city to dedicate a large perimeter for the event, including a press center and a large parking facility, which Eilat can easily offer. Also, unlike most Israeli cities, traffic congestion is not a major issue for Eilat.

“Let’s not forget that above all, the Eurovision is a live television production for more than 200 million viewers, and there is zero room for mistakes, delays or traffic jams,” the source said. The city will also get a boost from the expected inauguration of a new airport just north of the city in early 2019. The airport will be Israel’s second largest.

“Eilat will go out of its way to host the contest if Jerusalem is not on the table,” the Eilat Municipality said. “It can meet the high standards this contest requires, and it successfully hosted previous international competitions before. Having thousands of people from around the world will be of great benefit for Eilat and for Israel.”