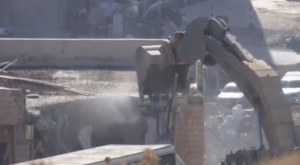 “Israeli authorities have proceeded with the demolition of 10 Palestinian buildings, containing some 70 apartments, in Wadi al Hummus, part of Sur Baher neighbourhood in occupied East Jerusalem. The majority of the buildings are located in Area A and B of the West Bank where, according to the Oslo Accords, all civil issues are under the jurisdiction of the Palestinian Authority,” the EU said.

“Israel’s settlement policy, including actions taken in that context, such as forced transfers, evictions, demolitions and confiscations of homes, is illegal under international law. In line with the EU’s long-standing position, we expect the Israeli authorities to immediately halt the ongoing demolitions.”

“The continuation of this policy undermines the viability of the two-state solution and the prospect for a lasting peace and seriously jeopardizes the possibility of Jerusalem serving as the future capital of both States.”

Earlier on Monday, Public Security Minister, Gilad Erdan (Likud) defended the demolition of illegal Arab apartment buildings on the southeastern fringe of Jerusalem Monday morning, saying the structures were built too close to the security barrier, and could be used as a haven for terrorists.

“The demolition of the illegal and mostly uninhabited buildings which takes place today at ‎Wadi al-Hummus in the village of Sur Baher, Jerusalem, was approved by the Israeli High Court of Justice,” said Erdan in a statement Monday morning, “which ruled that the illegal construction constitutes a severe security threat and can provide cover to suicide bombers and other terrorists hiding among civilian population and endanger the lives of civilians and security forces alike.”

“The court also ruled unequivocally that those who built houses in the area of the security fence, knew that building in that area was prohibited, and took the law into their own hands.”

Israeli forces sealed off and began demolishing ten of the over 100 illegally-built structures erected in defiance of a 2011 Israeli Civil Administration order barring construction near the security fence.

The apartment buildings were built in the Wadi al-Hummus neighborhood of Sur Baher, an Arab enclave located almost entirely in Jerusalem.

The strip of land in Wadi al-Hummus area where the illegal structures are located, however, is just outside of the municipal borders of Jerusalem, but on the Jerusalem side of the security fence.

Prime Minister Binyamin Netanyahu’s spokesman Ofir Gendelman said in a social media post Monday that the demolitions were ordered in light of the “hundreds” of security incidents in the area last year.

“During the last year there were hundreds of security incidents and thousands of attempts by Palestinians to infiltrate our territory, some of them to carry out terrorist operations,” he tweeted.