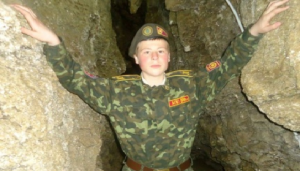 At age 16, Sergei Brezhnikov, joined the Ukrainian “Children’s Army,” then at 19, he made aliyah, and after studying Hebrew, enlisted in the IDF.  Now, prior to his training as a medic, says “In Israel, I’ll have a better future.”

“Israel is my new home, and I see my future here, only,” says Sergei Brezhnikov, 20, a lone IDF soldier who made aliyah from Ukraine.

Brezhnikov was born in the city of Vinnytsia, the only child of a single mother who was 19 when she had him. He had no contact with his father. At age 16, Brezhnikov enlisted in the Ukrainian army and served two years as a tank mechanic with what is known as the “Children’s Army.”

“I was a soldier in every sense of the word. In Ukraine, it’s normal for 16-year-olds to serve in the army,” Brezhnikov says, noting that was issued a uniform and a Kalashnikov rifle.

“Conditions were hard. We would sleep 200 soldiers to a room and they treated us pretty badly,” he adds.

When he completed his service at age 18, Brezhnikov started studying medicine with the hope of becoming a dentist, but after a year of university decided to emigrate to Israel.

“It was hard for my mom. She stayed on her own, but supported me and I knew that in Israel I would have a better future,” he says.

In December 2014, Brezhnikov arrived in Israel as a new immigrant and began studying Hebrew in Carmiel, near Haifa. Three months ago, he was inducted into the IDF and sent to a Hebrew course for soldiers run by the Education Corps, which he completed last week. Brezhnikov is slated to start training as a medic and will perform his service in medical-oriented roles.

“My dream is to become a plastic surgeon, and a medical career in the army is also definitely an option, as far as I’m concerned. In Israel, I’m a lone soldier who lives in an apartment in Rehovot that the Society for the Welfare of Soldiers arranged for me, and I’m very happy. They take care of everything for me,” Brezhnikov says.

The new recruit last saw his mother six months ago.

“It’s hard for me, too, [but] mainly for her, because I’m an only child. I hope that after I get on my feet in Israel, she’ll also make aliyah and live with me here,” Brezhnikov says.