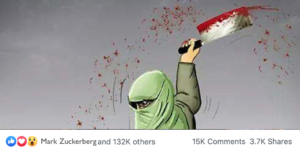 It also declined to consider the plaintiffs’ foreign law claims, noting that most plaintiffs, including relatives and estates of victims, said they were Americans living in Israel.

The plaintiffs originally sought $3 billion in damages from Facebook, for allowing Hamas to use its platform to encourage terrorist attacks in Israel, celebrate successful attacks, and generally support violence toward that country.

Their complaint described Hamas attacks against five Americans, four of whom died, in Israel from 2014 to 2016.

The plaintiffs included the parents of U.S. veteran Taylor Force, who was stabbed to death at the age of 28 in a 2016 terror attack in Jaffa, and the son of 76-year-old Richard Lakin, an American-Israeli former educator who was murdered in a shooting attack on bus in Jerusalem in 2015.

“This a tragic victory for the terrorist groups who now have a court sanctioned license to continue to organize, recruit, fundraisers and publicize their extremist violence on the social media platforms,” said an attorney for the plaintiffs, Nitsana Darshan-Leitner of the Shurat HaDin Law Center.

“Unfortunately, the majority decision has expanded CDA section 230 far beyond its original intent. This is judicial legislation of the worst sort and endangers real people’s lives,” she said.

Wednesday’s decision is a fresh setback to efforts to hold companies such as Facebook and Twitter Inc liable for failing to better police users’ online speech.

Palestinian incitement to butcher Jews and Israelis posted on Facebook

It upheld a May 2017 dismissal by U.S. District Judge Nicholas Garaufis in Brooklyn.

In seeking to overturn that dismissal, the plaintiffs said Facebook functioned as a matchmaker between Hamas and people receptive to its messages, and should not be immune from liability as a mere “publisher” of Hamas’ content.

Circuit Judge Christopher Droney, however, said it would turn the CDA “upside down” to suggest that Facebook’s having become an “especially adept” publisher exposed it to liability.

He said Congress did not consider how broadly to immunize social media companies, when it passed the CDA to regulate online pornography, and might rethink how to treat those accused of encouraging terrorism, propaganda and extremism.

“Over the past two decades the Internet has outgrown its swaddling clothes,” Katzmann wrote. “It is fair to ask whether the rules that governed its infancy should still oversee its adulthood.”

Another attorney for the plaintiffs, Robert Tolchin, praised Katzmann “for his insightful analysis with what is wrong in the majority opinion,” adding that his clients “intend to move for a rehearing by the full court and anticipate that Judge Katzmann’s views will prevail at that level.”

The U.S. Department of State has designated Hamas a foreign terrorist organization since 1997.