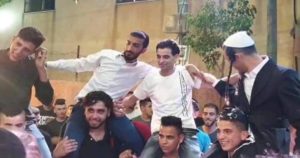 The Palestinian ruling Fatah faction decided to expel the mayor from its ranks and has called on the Palestinian Authority security forces to launch an investigation against the Palestinians who were seen celebrating with the settlers during the wedding.

Fatah said it has also formed a commission of inquiry to investigate Radi Nasser, the mayor of Deir Qaddis, 16 kilometers west of Ramallah.

The commission decided to immediately dismiss Nasser from Fatah and said it will work to remove him from his job. The mayor was elected as a representative of Fatah.

The committee also said that it has decided to deliver the names of Palestinians who attended the wedding to the Palestinian security forces so they would face legal measures.

Pictures from the wedding showing a number of settlers being carried on the shoulders of some Palestinian men appeared on social media, drawing strong condemnations from many Palestinians.

Palestinian social media users expressed shock and anger over the presence of the settlers at the wedding and accused the mayor, and his son the groom, of treachery.

The Fatah leadership issued a statement strongly condemning the presence of settlers at the wedding, dubbing it harmful to Palestinian national customs. Calling on the mayor to immediately submit his resignation, the statement stressed Palestinian opposition to normalization with Israel.

Fatah spokesman Osama Qawassmeh said that the participation of “terrorist settlers in Palestinian social events is a cowardly, condemnable, despicable and reprehensible act.”

The mayor denied that he or his son had invited the settlers to the wedding, which took place in Deir Qaddis on Wednesday night.

“I wasn’t at the scene because I was receiving guests at another location for dinner,” he said. “When I learned about the presence of the settlers, I kicked them out, together with the [Palestinian] men who were with them.”

He said that the four settlers were brought to the wedding by some Palestinians who work with them in a car repair garage.

The mayor said that despite the incident, he remains loyal to Fatah.

The above story is just another immoral characteristic of the Palestinian leadership, that by the way, was omitted when I pointed out these evil ‘attributes’ of any future Palestinian state:

Simply, Rotten to the Core!… and still,
the world supports….loves them.
I just don’t get it.