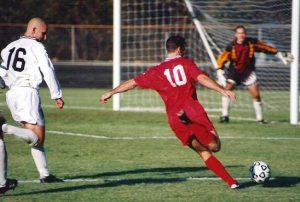 The Palestine Football Association (PFA) which is headed by Jibril Rajoub, along with groups such as Human Rights Watch, has long attempted to force FIFA ban six Israeli teams in Judea and Samaria, claiming that their presence there is in breach of FIFA statutes, which forbids another member association playing on another territory without permission.

Earlier this year, FIFA delayed a decision on whether to ban the six Israeli teams, leading the PFA to appeal to the world’s top sports court in an attempt to force FIFA to rule on the matter.

The PFA has also complained that Israel hampers its activities, including limiting the movement of players between Palestinian Authority-assigned areas of Judea and and Gaza.

In 2015, the PFA proposed during a FIFA Congress that Israel be suspended from international soccer but backed down after FIFA set up a task force led by South African politician Tokyo Sexwale.

“FIFA has decided to refrain from imposing any sanctions or other measures on either the Israel FA or the Palestinian FA,” Infantino told a news conference after a FIFA Council meeting, according to Reuters.

“These territories are a concern for the international public law authorities and FIFA has to remain neutral,” he added.

A FIFA statement released separately said, “The matter is declared closed and will not be the subject of any further discussion until the legal and/or de facto framework has changed.”

The statement acknowledged that the situation was exceptionally complex and said that any interference by FIFA could aggravate the soccer situation in the region.

“FIFA’s decision is a great victory for our fight against boycott attempts. The attempt of the instigator of terrorism Jibril Rajoub to use sport as a political weapon against Israel has failed and we will continue to act to thwart the boycott initiatives of the Palestinians and the BDS organizations,” Erdan said Friday.