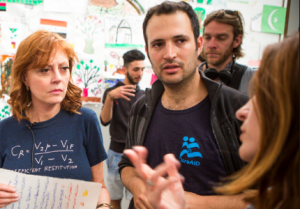 Israeli humanitarian aid organization IsraAID this month hosted Oscar-winning actress Susan Sarandon at a compound housing thousands of families that have fled the Middle East to find safety in Europe.

At the camp for displaced persons, IsraAID is running a psychosocial program, providing support to homeless and orphaned minors and training German civil servants and volunteers who are working at one of dozens of camps across Germany.

During the visit, Sarandon praised the work of the Israeli volunteers, saying:

“I had already met the organization IsraAID in Lesbos and I was impressed with their ability and the professionalism of the team, and so I decided to again join their initiative in Germany.”

Sarandon previously met with IsraAID workers at a refugee camp on the Greek island of Lesbos, where the Israeli group is still active in providing medical aid and psychosocial treatment to those fleeing the Middle East.

After visiting and even taking part in the IsraAID efforts, Sarandon donated equipment to help IsraAID in its ongoing work in Germany.