Over the last year, however, the two have been brought together – in part by their shared plans to convert to Judaism. 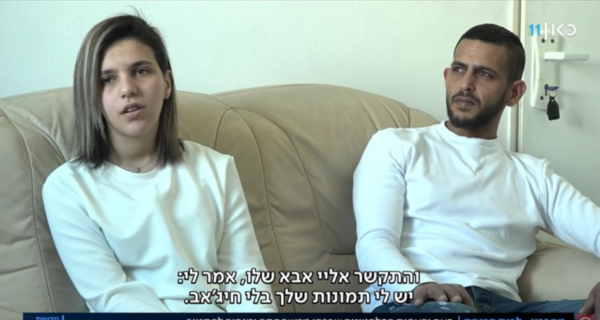 Sadeen recalled how she escaped from her family’s plans to force her into an arranged marriage, finding refuge in Israel.

“In 2020 I was being forced to marry someone, when his father called me and said: ‘I have photographs of you without your Hijab. If you don’t tell your father that you don’t want to marry [my son], then tomorrow I’ll show your father the photos and he’ll take care of it’.”

“I already didn’t want to get married, so I spoke with my father a few times. Each time, he would beat me, he didn’t accept it. So I thought: ‘Saddam has already left the house, doesn’t speak [with the family] and doesn’t care what they think. I didn’t do anything to deserve you killing me over this.”

Saddam was living abroad when Sadeen called for help, but was in Israel for a vacation.

“I thought about my sister, Nivin, whom they murdered in 2017. So I told her: ‘Listen, it’ll take me five hours to get to you from Akko [Acre], but if you really want to leave home, I’ll come and take you.”

Sadeen said her escape was “terrifying”, but also “lucky”, noting that her father had not woken up when she left early in the morning with Saddam, and added that her father usually “took the keys with him”, but had failed to do so the night before she left.

After being taken to a small apartment where her brother was staying, Sadeen was pursued by her family, who sent several men to demand she return home, threatening her if she refused.

When the men began to curse at Sadeen, threatening her if she did not return home, Saddam intervened, demanding they leave and calling police. Officers arrested the men who had been sent to harass Sadeen.

Israeli authorities sent Sadeen to a shelter in Nazareth, where she lived for seven months. Sadeen said her time in the shelter was traumatic, and that she was physically abused.

Five months ago, Sadeen left the shelter, and was reunited with her brother.

Unable to legally work in Israel with her temporary residency pass, Sadeen struggled to support herself after she left the Nazareth shelter, and nearly ended up working as a prostitute.

Saddam, who resides illegally in Israel but has a work permit, helps support his sister, with authorities turning a blind eye to his illegal residency.

“There are a lot of people here who helped me,” said Saddam.

Sadeen said that life in Israel was “very different” from what she had experienced in the Palestinian Authority.“When I got here – everyone here is Jewish. They behave [differently], they are respectful. They are very accepting in how they relate to people.”

Growing up, Saddam said he was taught to “hate the Jews”.

During her time in Israel, Sadeen said she became interested in Judaism after watching observant Jews during the Sabbath.

“I saw a few times how they keep Shabbat, how they observe everything. You learn something which you don’t have to learn, something which isn’t part of your religion and so you aren’t obligated to learn it. You’re learning something you want to learn.”

Saddam says he hopes to serve in the IDF, while Sadeen aspires to be an attorney and help people who find themselves in similar circumstances she lived through just months ago.

Sadeen explained her decision to reveal her story on television, placing herself and her brother at risk from their family.