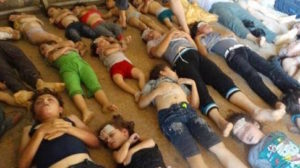 Iran is building and testing short- to medium-range missiles armed with chemical warheads in Syria, former Syrian general Zuhair al-Saqit told [The Jerusalem Post‘s sister publication] Maariv. Al-Saqit, who heads the Center for the Detection and Monitoring of the Use of Chemical Weapons in Belgium, also said that Iran’s Lebanon-based proxy Hezbollah is in possession of chemical weapons, mostly handed to it by the Assad regime in order to hide their existence from international monitors.

In an interview in Paris, al-Saqit said that a large part of Syria’s chemical weapons stockpiles, which were hidden from international inspection bodies, were transferred to Hezbollah.

Iran continues to be a major supplier of chemical weapons to the regime of President Bashar Assad and continues to develop chemical weapons in Syrian territory, he said.  Iranian scientists, technicians and military personnel are developing missiles with chemical warheads ranging from 5 to 35 kilometers that can be carried in vehicles or by small army units within Syria — or across the border, he said.

General al-Saqit came to Paris to warn European governments that, contrary to popular opinion, the problem of chemical weapons is not yet off the table. “The Syrian army and the militias supporting it carry out daily attacks on the population, which uses chlorine gas. Only yesterday there was such an attack,” he said.

Al-Saqit deserted the Syrian army in 2013 and left the country after being responsible for the scientific development of chemical warfare weapons during the civil war. He refused to use chemical weapons against civilians and replaced chemical munitions with harmless materials.

The center he heads today receives and records testimonies from the field and examines them. According to him, contrary to the regime’s official stance, the videos from Syria showing victims of chemical attacks are not fabricated.

On the issue of Syrian cooperation with North Korea, al-Saqit confirmed that North Korea had indeed supplied Syria with chemical weapons and assisted in their installation and operation against civilians. He also said that in his capacity as senior officer in the Syrian army, he accompanied North Korean officers who came to advise on chemical weapons for the various units.