After a visit to Israel 2 weeks ago, a group of 4 Northern Irish shared their impressions.

Michael Copeland, a member of the Northern Ireland Assembly, recalls a recent protest near his office in Belfast during Operation Protective Edge. “There was civil disorder, with people waving Palestinian and Israeli flags.” He also recalls how Israeli goods were removed from stores, one of many vignettes of how the conflict played itself out in Europe. “The world’s press does not do Israel great justice,” Copeland notes. 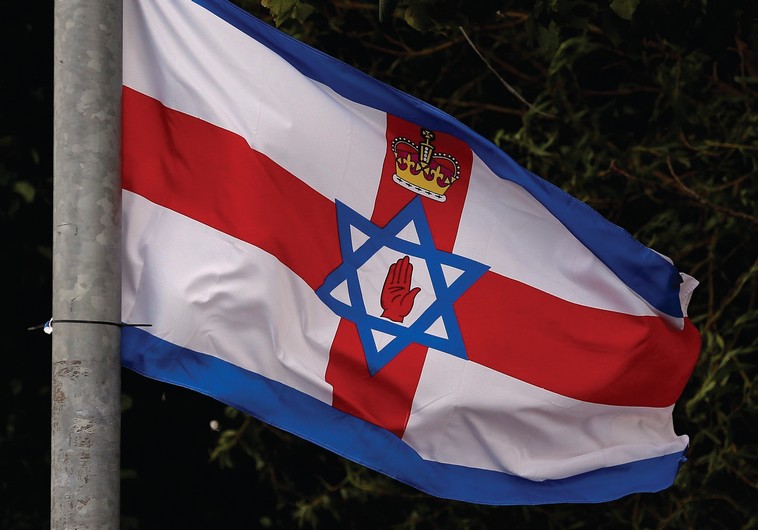 A FLAG comprising of various elements including the Ulster Banner and the Star of David. – Photo: REUTERS

He is one of a group of four Northern Irish who visited Israel two weeks ago. They were brought together under the auspices of Face of Israel, a non-profit that brings different groups to Israel to allow them the opportunity to see the country up close. For this group, the main focus was addressing Post Traumatic Stress Disorder. Copeland, the only man in the group, seemed like an informal leader. A straight talker who enjoys a smoke, he is a Protestant Unionist politician for Belfast East and a former lieutenant of the Ulster Defense Regiment – he knows a thing or two about conflicts. “I still carry a firearm back home,” he notes.

In 2005, a peace treaty was signed by the British and the Northern Irish to end hostilities and terrorism, yet scars – both outward and invisible – remained on both sides, and almost a decade later, citizens of Northern Ireland are still searching for ways to cope with the trauma cause by, what was affectionately known as, “The Troubles.”

The most interesting issue that is raised when comparing and contrasting Northern Ireland and Israel, is whether the two conflicts have much in common. In the 1990s, with the end of the Cold War and renewed hope of peace in both places, the countries seemed to be heading in the same direction with the signing of the Oslo Accords in Israel and the Good Friday Agreement in Northern Ireland.

As we now know, the Irish Republican Army did decommission its weapons, a process that began in 1999 and lasted through 2009. The diametric opposite happened in Israel, as the second Intifada broke out in 2000. In conversations with the visitors it was clear that the rosy picture painted of peace in Northern Ireland is not entirely clear.

“I feel there are parallels with the Irish community. [Here] it is missiles being fired, back home they planted bombs in certain buildings and would call and tell you,” explained Joanne McKenna, a clinical consultant for a hotline for sufferers of acute PTSD, who is from the Catholic community. The other members of the delegation were Protestants.

“In the period of the Troubles we knew the areas to avoid. They fired at families, women and children,” recalls Caroline Knight, an emergency nursing sister at Ulster Hospital and a former officer in the Royal Army Nursing Corp. “The very fact that you need a bomb shelter here is shocking,” she added.

Floyd was just a child during The Troubles, the period of violence in N. Ireland lasting through the 1990s, and she recalls there were fences around her house that the police and army told her not to go to. Knight’s father worked in the security services for the British. “I was four in 1969 when The Troubles began [and those in the security forces] were marked people. We lived in fear of people coming to kill my dad. I remember him checking his car for indications that a bomb had been planted underneath it. Until my dad died, my friends didn’t know what he did.” McKenna’s uncle was shot, and a friend murdered by a Loyalist pro-British paramilitary.

PTSD sufferers in Ireland come in many forms, from domestic violence, to those whose disorder is related to armed conflict. For Copeland, one of his main interests is in how Israel treats PTSD. “I was a former officer in the British army and there were a large number of sufferers from PTSD and Complex PTSD. During the course of conversations [back home] we realized that Sderot is a center of excellence [in this issue] and I assembled a number of people who were interested in how our state fails to diagnose [it].” Among those he brought were McKenna, Knight, and Alana Floyd, who works for the Northern Irish parliament and describes herself as a survivor of PTSD.

Interestingly, Copeland has an Israeli back story. “My grandma was born three doors from [former president] Chaim Herzog.” His uncle served in the Irish Guards, a British infantry regiment recruited in Northern Ireland which was deployed to Palestine after the Second World War. Copeland tells the story of how his uncle was at the King David Hotel in 1946 when “history and he coincided,” in the bombing of the hotel that year and his uncle was lightly wounded. In addition, “my own regiment had people who had been here in the Mandate or in the Palestine police.”

Copeland had a long interest in seeing the archaeological and historical background of Israel. He was struck by “the walls of Jerusalem, and to see so many complex variants of religions, all of which are intermingled in the same place; seemingly coexisting and protected by the laws of the state. We met Arab-Israelis and Orthodox and secular.

And on every single occasion, we have not been treated just as guests, but as friends.”

The group’s travels was a mix of visiting Israel health centers that deal with PTSD and seeing historical sites such as Masada. They were impacted by both experiences Floyd noted that, “It is exciting for me to see the trauma centers. I know that I want to see me [and my experience] in them. So I know when I speak with another person that I know what they are going through.”

Copeland asserts that one of the issues they have faced in Northern Ireland is a lack of early diagnoses of this disorder. “Initial diagnosis at an early state is key. The lessons I’ve learned working with people with PTSD is about how the state should treat people who have a condition that is evident.”

McKenna agrees. “It was interesting to see the similarities in Sderot with how people work at home and how they cope with trauma here and they never give up and [they put forward] a message of hope and of keeping going and I am a counselor and very interested in how people therapeutically work here. It seems to be quite similar. There seemed to be knowledge of this. I would like to be able to bring it back with me.”

Knight was also struck by what she saw in Sderot. “I have been so impressed with the level of awareness and recognition of PTSD that we have witnessed here in Israel, and the overall focus on community, positivity, and preventative approaches in the culture of treatment here. Israeli society is a brilliant phoenix rising from the fire.”

They were interested to see how many public art projects there were in Sderot – which ranges from brightly painted bomb shelters to sculptures fashioned out of old mortar shells and kassams. The group commented that turning negative symbols into something positive, like art, is a form of therapy to help alleviate PTSD.

Although their friends back home often see Israel through the prism of conflict reported in the media, they were fascinated to see that the reality is different on the ground.

“I didn’t come with preconceived ideas, the way the media has portrayed the country has been negative and I wanted to come with a fresh mind,” Knight says. “The people we met, they are kind and generous with their time. It was inspirational.

They have bags of energy.

My reason for coming was that I feel [for] the treatment of patients with trauma, I wanted to learn because I heard Israel is a center of excellence and [what] these guys [showed us] were over and above any treatment I would have expected. It was inspirational.”

Copeland, who sees the situation up close as a politician with a constituency to answer to, argues that the issue of peace is actually an “absence of violence” rather than true peace. “[Protestant] Unionism thought the settlement was final and the [Catholic] Republicans thought it is a process and it is destabilizing the government. The real barriers are not peace walls, it is in the hearts and minds of people. If you are doing well financially then you are doing okay with others, and the same for the poor.” The fact is they noted that there are more “peace walls,” physical barriers, that divide neighborhoods today than when peace was established.

When contrasting with Israel they noted that the visible differences of Arab and Jewish neighborhoods is more striking. “Back home it is hard to tell, except for a football [soccer] shirt or how someone pierces their ear,” notes Copeland. Knight notes that youth are still taught to be divided in Ireland. “They repeat attitudes of the past. They were not alive during The Troubles, they hear it from their community.”

The murals glorifying violence, showing men with rifles in balaclavas, that were such a symbol of the IRA and Protestant paramilitaries, are still visible. “The flags and murals are intimidating, the mural tells you whose area it is. So you know to keep your wits about you,” recalls Floyd. In Northern Ireland the Israeli-Palestinian conflict plays itself out in a local way, with Protestants tending to support Israel and Catholics seeing their struggle in the Palestinians. It isn’t a surprise that in the 1970s some IRA members got to know the PLO and the groups formed a bond.

When asked if there is a lesson for Israel, the delegation was not enthusiastic. “Peace is trumpeted the most, by those who did the least,” Copeland argues. “I think we could learn from here, because people here are very positive and they take negative issues and make them positive,” says Floyd. McKenna said that seeing the hardships Israelis face makes her more thankful for what they have back home.

“The buzzword today is ‘equality,’ until everyone is equal, no one is equal,” Copeland says. “We started a journey in our country,” Knight concurs. They all think it is a work in progress.

At the end of the day, as the sun sets on the Dan Panorama Hotel where the group was staying in Jerusalem, and we moved out to the veranda for a cigarette, the group relaxed and debated how they felt about the trip so far. “When we go back we can say we have seen a lot of things,” said Floyd. “It was mostly ignorance [what we have back home], I expected to come to a conflict, but it is a beautiful country.”

Copeland has taken away a very pro-Israel message. “Israel is a western democracy that happens to be geographically in the Middle East and the nations around Israel who complain about human rights don’t extend human rights to their citizens… Any state under attack has a duty to defend its citizens within the confines of the laws of war.” The others nod in agreement. “What we have seen here has been very emotional, and the people we have met have been very inspiring. The fact that Israelis don’t give up in the face of their trauma[s] has given me a lot of hope for what we can accomplish in Northern Ireland too,” says McKenna.