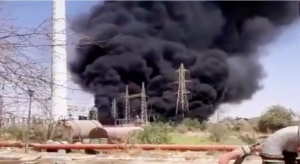 On Saturday yet another massive fire damaged a power plant in its restive Khuzestan province. Iran said, once again, this was an accident. But quietly Iran is letting it be known that there are concerns, including through commentary at its major media suggesting it might respond to the attacks.

On July 3, ImageSat International (ISI) revealed images of the Khojir facility, the one that blew up on June 26. That was the first of the four explosions. The ISI assessment says that gas tanks were damaged under a shed and that the gas was destined for a missile facility nearby.

We now know that another incident occurred at a medical center days later in Tehran and then another explosion damaged the Natanz facility on July 2. The July 2 explosion was then identified by Kuwait’s Al-Jarida media as a cyber attack. This ups the concerns for Tehran, because if it feels it is under a cyberattack it will need to respond.

The latest explosion at a power station in Ahvaz appeared to occur at a power station that regulates electricity carried through automation and industrial controllers that can be manipulated by a cyber attack, according to the open source intelligence social media account Intelli Times. Whether or not that is the case is not as important as perceptions of what has happened and what Iran suspects may have happened.

If Iran says it is under wide ranging, near-daily, cyber assault, it will weigh what to do next.

Iran is proficient at cyber warfare; it has carried out attacks in the past. Iran is also involved in a half dozen conflicts around the Middle East. It has been bragging about arming the Houthis in Yemen with drones and missiles to attack Saudi Arabia. It has also been showing off its links to Hezbollah and Shi’ite militias in Iraq.

On Saturday in Iraq tensions rose as some kind of explosion was heard near the Green Zone where the US embassy is located.

Iran is also operating against Kurdish dissidents along the Iraq border and is involved in Syria’s conflict. It sent its IRGC Quds Force commander Esmail Ghaani to the Albukamal border town last month. Tensions in southern Syria between Iranian-backed elements and others are increasing.

So far Iran has remained relatively quiet in official responses. It has said the fire at the power plant on Saturday was extinguished without casualties. That was in contrast to the medical center explosion last week that did cause casualties.

This is what Iran must weigh today: If Iran says it is under attack it must respond or be humiliated. It would also show that its systems are compromised at its most sensitive sites. If it says that all these are accidents then it must explain why there are so many accidents. Neither choice is enviable. Either it will show weakness in its defenses, or failing infrastructure.

The regime in Tehran thrives on boasting of its capabilities. Also if it says it is under attack it will also show it has been lying to international bodies potentially about the security of its nuclear program. Since it has claimed these attacks were minor, taking government media on tours, it would show it has lied. It has lied before. It shot down a Ukrainian airline in January. But how many lies can the regime tell? It must be careful in this respect.

This, the 4th massive fire from an explosion, damaged a power plant in the restive Khuzestan province. July 4, 2020 – Screenshot: Twitter

Iran is seeking to trigger the nuclear dispute mechanism as part of the 2015 Iran deal. If it triggers the mechanism while claiming it is under attack this will lead to questions about what it is seeking to accomplish. At the same time Iran may have suffered an impact to key aspects of its supply chain for its surface-to-surface missiles and its key advanced centrifuges program. The advanced centrifuges require a certain gas known as hexafluoride. These may be the advanced IR-6 centrifuges.

The overall picture in Iran is a regime pushing message discipline to weigh its response. It is juggling many files across the region and dealing with the European Union while holding high hopes for ending an arms embargo and going shopping in China and Russia in the following months. The regime may not want to upset the apple cart.