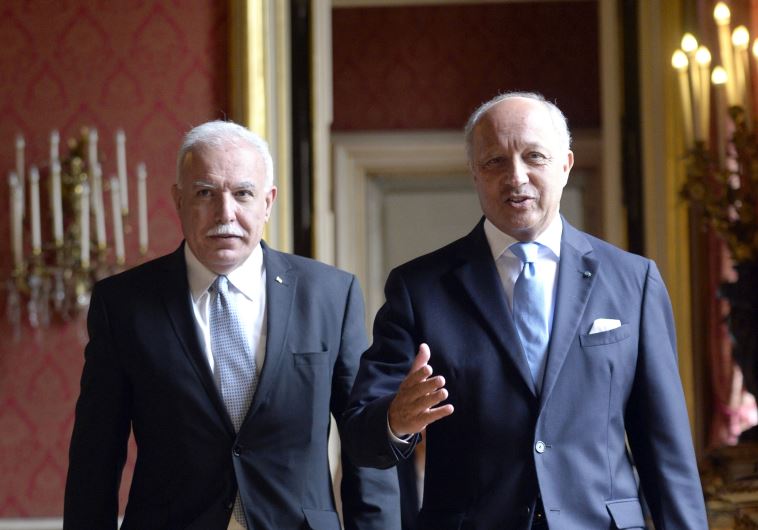 Following a meeting in Paris between Fabius and PA Foreign Minister Riad al-Malki, the French Foreign Ministry issued a statement that indicated Paris was beginning to set the groundwork for future French recognition of “Palestine.”

“The meeting,” according to the statement “also provided an opportunity to prepare for the first French-Palestinian intergovernmental seminar, the first session of which will be aimed at strengthening our relations in the political, economic and cultural spheres.”

One senior Western diplomatic official told The Jerusalem Post recently that the French backtracked from their UN proposal after facing objections from both Israel, who objected to the idea of imposing a solution form the outside, and the Palestinians, because they were unhappy that the resolution did not give them everything they wanted.

Instead, he said, the French would likely offer a trade off: recognition now instead of the resolution. The French parliament, along with a number of European parliaments, recommended taking such a step last year, after the Swedish government became the first significant Western European country to do so.

Unlike the Swedish move, or the move by the European parliaments, French recognition, the official said, could very well lead other EU states to take similar action.

The statement issued Tuesday said the talks between Fabius and Malki “provided an opportunity to review the situation on the ground, which is deteriorating on a daily basis in the absence of any political perspective.”

Although the statement said that Fabius “reaffirmed France’s mobilization in support of peace in the Middle East,” it made no mention of the UN resolution proposal. The statement did, however mention Paris’s proposal to establish “an international support group.”

Fabius, during a visit to Israel in June, spoke of three components to a new French diplomatic plan.

The first was direct negotiations, the second was the construction of an international support group to help the sides bridge gaps and the third element was the Security Council resolution.

While details of the international support group are still limited, the overall concept is the expansion of the Quartet – which includes the US, EU, Russia and the UN – to include some moderate Arab states, as well as France and some other European countries.