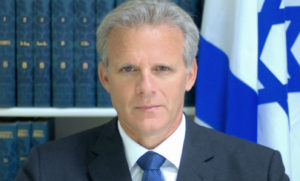 “Praise for the US for vetoing Security Council resolution on Gaza that didn’t mention Hamas and condemned the IDF for defending Israel. Shame on France for supporting it. French government cannot say it’s against anti-Semitism and vote for this anti-Semitic resolution,” Oren wrote on Twitter.

Shame on you M. Oren for insulting France on the eve of the visit of your Prime Minister to Paris. You didn’t read the resolution. It was not perfect but condemned all the violence against Israel. France is adamantly supporting Israel’s security.

Hélène Le Gal, France’s Ambassador to Israel, responded harshly. “Shame on you M. Oren for insulting France on the eve of the visit of your Prime Minister to Paris. You didn’t read the resolution. It was not perfect but condemned all the violence against Israel. France is adamantly supporting Israel’s security,” she wrote.

The Kuwaiti draft resolution, which was vetoed by the US, expressed “grave concern” at the increased violence and deteriorating situation in the Palestinian territories and called for urgent steps to ensure a “durable and fully respected ceasefire.”

It asked UN Secretary-General Antonio Guterres for a written report within 60 days on ways to ensure “the safety, protection and well-being of the Palestinian civilian population under Israeli occupation,” including recommendations about “an international protection mechanism.” The measure also urges humanitarian access and seeks “tangible steps” toward reconciliation between different Palestinian factions.

A resolution needs nine votes in favor and no vetoes by the United States, Britain, France, Russia or China to be adopted.

US Ambassador Nikki Haley called the resolution “grossly one-sided” for demanding that the IDF halt “the use of any excessive, disproportionate and indiscriminate force” while not mentioning Hamas, the terrorist group that controls Gaza.

“This resolution is wildly inaccurate in its characterization of recent events in Gaza” and “would harm any efforts toward peace,” she said.

An alternative US resolution deleted the reference to Israeli force and protecting Palestinians. Instead, it demanded that Hamas and other Palestinian terror groups stop “all violent activity and provocative actions” in Gaza.

That resolution failed to pass. Only the United States voted in favor of the second draft resolution, while there were three negative votes and 10 abstentions.