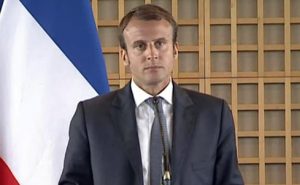 But there was another aspect to the election for Palestinians, who have in recent years tried to get France to take a central role in the Middle East peace process, confident that the liberal European power would be among the first to openly embrace a Palestinian state.

Surely, many thought, Macron’s liberal credentials meant he jump at the opportunity to help birth “Palestine.”

However, shortly before taking office, Macron made perfectly clear that he would do no such thing.

“Unilateral recognition of Palestine, right now, will undermine stability,” said Macron at a political rally, adding that he would not risk France’s relationship with Israel to serve the Palestinian agenda.

In fact, Macron is even on record equating anti-Zionism with antisemitism, insisting that hatred for the Jewish state “leads directly to antisemitism.”

Seems the Palestinians’ list of braindead allies is growing thinner.