Jews Tell Leaders: ‘You mock the Holocaust by shaking hand of ‘denier’!’ 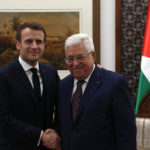 What’s wrong with this picture: First French President Emmanuel Macron loses his cool when visiting Jerusalem, throwing his Jewish security guard out of St. Anne’s Church, then goes to visit the Palestinian autocrat, a Holocaust-denier, and warmly shakes his hand before attending the World Holocaust Forum.

For the second time in as many days, visiting French President Emmanuel Macron inadvertently called into question the assertion that he’s here to commemorate the Holocaust and combat antisemitism.

TRANSLATION: Angry blow from #Macron against the Israeli police in Jerusalem. Continue Reading »

During a two-hour meeting in Paris with French President Emmanuel Macron, Israel’s Prime Minister Netanyahu declares very clearly that Jerusalem will not allow, under any circumstances, for Iran to establish ground or air bases for their soldiers in Syria, or Lebanon.

The warning came during a two-hour meeting the two leaders held in the Élysée Palace, after a ceremony earlier in the day marking 75 years since the roundup and deportation of more than 13,000 French Jews during the Holocaust. Continue Reading » 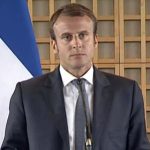 But there was another aspect to the election for Palestinians, who have in recent years tried to get France to take a central role in the Middle East peace process, confident that the liberal European power would be among the first to openly embrace a Palestinian state. Continue Reading » 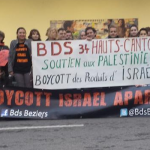 French independent presidential front-runner Emmanuel Macron said he is against BDS, against boycotts and said such anti-Zionism leads directly to antisemitism.

PARIS – French independent presidential candidate Emmanuel Macron said on Sunday that recognizing a Palestinian state at this stage would serve nothing.

The important task now is to create an atmosphere that will enable a peace process to be launched, the 39-year-old said in an interview on the Jewish community Radio J station in Paris.

Less than two weeks before the first round of elections, French voters seem increasingly indecisive about which candidate to choose. Continue Reading »