From Uzbekistan, the twins Fatima and Zukra join the IDF as Yael and Noga 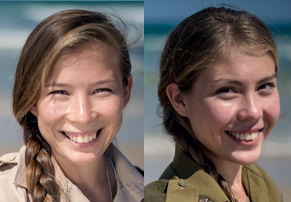 They were born 19 years ago in Uzbekistan and have attended a Muslim school. When they learned of their father’s roots, they decided to come to Israel with their families. Today,  Islambakov serve in the Israel Defense Forces. One of them has converted to Judaism and the other will soon finish the conversion process. They have both changed their names. Yael and Noga’s spectacular story.

Fatima and Zukra Islambakov, twins to a Muslim mother, were born 19 years ago in Uzbekistan. After several years in a Muslim school, they discovered that their father was Jewish, after Jewish Agency representatives showed up at their home, trying to convince them to make Aliya.

They abandonded the local tradition and arrived in Israel, still remaining, however, Muslims by Israeli law. Today they serve the IDF, after a conversion and name-change process. One of them even took part in one of Operation Protective Edge’s significant operations.

They are no longer Fatima and Zukra – but Yael and Noga. Their last name was also changed, from Islambakov to Steinman. Fatima, or Yael, have already finished a military conversion to Jewdism course, and her sister Zukra (soon to be Noga) – is due to complete the process within a few days.

Over the years they have received many comments – regarding their names and their unique exterior look. There have been guys who have preferred to end relations with them after finding out their story. The two have felt the need to make the transformation and become Jewish. With their mother’s and father’s encouragement, they began the extraordinary process.