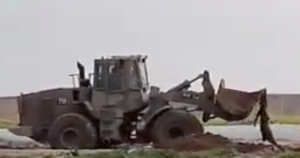 Several explosions, likely interceptions, were heard across southern Israel after sirens blared in cities of Ashkelon, Sderot and dozens of communities bordering the Hamas-run coastal enclave.

Following the rocket barrage, the mayors of Ashkelon and Gan Yavne ordered the opening of all public shelters throughout the city. The mayor of Sderot urged citizens to remain close to shelters as well.

Two injured Israelis were brought to the Barzilai Hospital in Ashkelon after the rocket sirens on Sunday evening, including one woman, aged 64, in light condition who fell and hit her head while running to a shelter and another woman, aged 20, who was suffering from anxiety.

A barrage of 20 rockets was just fired from #Gaza into #Israel.

Approximately 10 rockets were intercepted by the Iron Dome.

This map shows all the areas in Israel that just came under fire: pic.twitter.com/OxvBfwAuuW

In the second round of rockets fired at Ashkelon, an empty car was struck by shrapnel. No injuries were reported. Later in the evening, Ashkelon announced that studies throughout the city would be cancelled on Monday in all educational establishments.

“Considering the security tension in the past few hours and the lack of certainty we find ourselves in, I have decided not to take a risk on the lives of our children and to cancel studies in all educational systems in Ashkelon,” said Mayor of Ashkelon Tomer Glam.

The United Nations Special Coordinator for the Middle East Peace Process, Nickolay Mladenov, and Egyptian intelligence are speaking with both sides in order to try and calm the situation and prevent a further escalation, according to Palestinian reports.

Soon after the first round of rockets were launched, PIJ took responsibility for the rocket fire, saying it was in response to the killing of the terrorist who tried to plant explosives in the southern Gaza Strip earlier on Sunday.

“We affirm that the resistance is ready and in a state of alert in case the occupation continues to expand its aggression and is ready to respond to it,” said the PIJ in a statement on Sunday evening. The terrorist group later warned that they would respond to any “aggression, if [Israel] responds.”

Hamas spokesperson Mushir al-Masri stated that the “Palestinian resistance” was monitoring the situation and would determine the direction and course of events.

“Our people have the right to defend themselves and the enemy alone bears the consequences of its continued aggression against our people,” said al-Masri.

Earlier on Sunday afternoon the IDF was reported to have increased the number of Iron Dome missile defense batteries over fears the Palestinian terror groups in the Hamas-run enclave would fire rockets in retaliation for the death of the terrorist.

Video from the scene uploaded to social media on Sunday morning showed a crowd of Palestinian youth throwing stones towards an Israeli bulldozer sent to retrieve the body of the dead suspect.

He was identified as 27 year-old Muhammed Ali al-Na’im, a commander of the Palestinian Islamic Jihad’s military wing, the Al-Quds Brigade, in the Khan Younis area.

The graphic footage showed the bulldozer driving at high speed toward a group of Palestinian youth to prevent them from taking the body. Several people were seen carrying one individual, but the bulldozer was seen lifting the body of the deceased suspect from the ground before it returned to Israel along with an IDF Merkava tank which had been guarding it.

Defense Minister Naftali Bennett called the uproar over retrieval of the terrorist’s body by the IDF bulldozer as “hypocritical criticism of the left,” and supported the IDF’s way to collect the body.

“I am sick and tired of the hypocritical criticism of the left against the ‘inhumanity’ of using by the bulldozer to retrieve the body of a terrorist who tried to murder Israelis. Gentlemen, you are not human. Hamas holds the bodies of Hadar and Oron,” he said, referring to the bodies of two fallen IDF soldiers in the hands of Hamas since Operation Protective Edge in 2014.

“I back the IDF that killed the terrorists and retrieved the body. This is how we should act in the face of terrorists.”

The Palestinian Ministry of Health in Gaza was quoted by Maan News Agency as saying that another two men were injured by IDF gunfire while trying to retrieve the body and the wounded individual.

According to the IDF’s Spokesperson’s Unit, two Palestinians were identified approaching the fence and placing an improvised explosive device on it near the southern city of Khan Younis. They were fired upon by troops from the military’s Kfir brigade “who were deployed to the location following the detection” of the suspects.

The Israeli military said the cell affiliated with the PIJ terror group which had placed the explosive device near the border fence on Sunday morning was responsible for two other similar incidents in recent months near the fence.

Palestinian Islamic Jihad called the incident “a brutal crime” and vowed to “not let the occupation deal with us as it does with some Arab states. We are placing our hands on the trigger and we will avenge the blood of the martyrs by firing on Tel Aviv.”

Last week, Defense Minister Naftali Bennett said that Israel would begin to “hoard” the bodies of Palestinian terrorists to use as “bargaining chips” to pressure Hamas to release of the two fallen IDF soldiers and two Israeli citizens held by the terror group in the Gaza Strip.

This is the second time in less than a week that IDF troops have opened fire on Palestinians near Khan Younis. Last week a Palestinian Islamic Jihad sniper cell fired towards troops stationed near the Gaza border. Israeli security forces-both IDF and officer’s from the police’s elite counter-terrorism unit-responded with artillery fire.

While the IDF said that it had “identified a hit,” there were no Palestinian reports of causalities.

The incidents come as Israel is trying to broker a long-term ceasefire arrangement with the Hamas-run coastal enclave.

On Saturday evening Liberman revealed that Mossad director Yossi Cohen and the Head of the IDF’s Southern Command Maj.-Gen. Herzi Halevi made a secret visit to Qatar earlier this month.

During the visit, which lasted less than a day, the two met with the Qatari envoy to the Gaza Strip Mohammed al-Emadi and Qatari national security advisor Mohammed Bin Ahmed al-Misnad and reportedly “begged” the Qataris to keep sending money to the blockaded Strip.

“Both the Egyptians and the Qataris are angry with Hamas, and they were going to cut all ties with them. All of a sudden Netanyahu shows up as a Hamas advocate, pressuring Egypt and the Qataris to continue” Lieberman told Channel 12 news.

Qatar, who is the main financial provider to Gaza, sends millions of dollars to Hamas every month. On Friday Doha said it would be increasing aid to the impoverished Strip and will provide some 120,000 families with $100 dollars by the end of February. Another $24 million will be used to build a new hospital in Rafah in the southern Strip.

Over a dozen rockets and mortars as well as countless explosive balloons and condoms have been fired towards southern Israel, as tension spiked following the release of US President Donald Trump’s Middle East peace plan at the end of January.

In mid-February following the launching of several projectiles into southern Israel, Jerusalem announced it would reduce the Gaza fishing zone from 15 to 10 nautical miles, and reduced the number of work permits from 2,000 to 500 for Gaza businessmen to enter Israel. The restrictions were lifted several days later.

Last week Israel’s Defense Minister Naftali Bennett warned that “the lawless conduct of Hamas leadership is bringing us closer to fatal action against them. We will not announce when or where, but no one will be immune.”

“The State of Israel does not want a war with Hamas in Gaza, but we have a commitment to the security of southern residents,” he said. “Hamas faces the choice: to choose life and economic prosperity or to choose terror and pay an unbearable price.”

Tzvi Joffre contributed to this report.