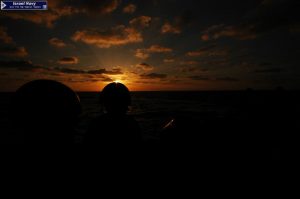 The Gaza Strip has been under both Israeli and Egyptian blockade for more than a decade from importing weapons or materials used  to make them by the Hamas gov’t & Palestinian militants in Gaza, having fought three wars since 2008.

A Gazan fisherman shot by Israeli naval forces on Monday after allegedly breaching the naval blockade off the Palestinian enclave has died from his wounds, an Israeli military spokeswoman said.

The fisherman’s family identified him as 25-year-old Mohammed Majed Bakr.

He was seriously injured and was evacuated to an Israeli hospital for medical treatment, an Israeli military spokeswoman said, where he later succumbed to his wounds.

Fishing off the Strip, which abuts Israel, is limited to six nautical miles offshore. Israel’s navy regularly fires at Palestinian vessels which veer towards the zone’s outer limit.

The Strip has been under a partial Israeli and Egyptian blockade for more than a decade. Israeli and Palestinian militants in Gaza have fought three wars since 2008.

Fishermen’s union head Nizar Ayash told AFP that the shooting and the arrest of four other crewmen happened in one incident and two more arrests were made when the military boarded another Gaza boat overnight.

An Israeli military spokeswoman confirmed the shooting but did not speak of additional arrests.

“A vessel deviated from the designated fishing zone in the northern Gaza Strip,” the spokeswoman told AFP. “Naval forces in the area called upon the vessel to halt and fired warning shots into the air.”

UN officials have called for the blockade to be lifted, citing deteriorating humanitarian conditions, but Israel says it is needed to keep Hamas, which runs the strip, from importing weapons or materials used to make them.

The size of the fishing zone has varied over the years, having been set at 20 nautical miles by the Oslo accords of the 1990s before being reduced by Israeli authorities.

About 4,000 fishermen work off the coastal strip, more than half of whom live below the poverty line.