A German soccer team withdrew from a sponsorship agreement with Saudi Arabia’s national airline because it refuses to ticket Israeli citizens. Read more at: http://www.jewishpress.com/news/breaking-news/155973/2013/12/05/
By BENJAMIN WEINTHAL, JERUSALEM POST CORRESPONDENT
BERLIN – The Frankfurt-based FSV second league football club terminated its advertising contract with the Saudi Arabian airline “Saudia” because it refuses to sell tickets to Israeli citizens. The Berliner Morgenpost reported on Wednesday in an article titled “Second division Frankfurt ends sponsorship because of anti-Semitism.”

“Despite the request of FSV for a statement to the allegations, Saudi Arabia’s airline as a state owned airline, referred the matter to the Saudi Arabia embassy in Berlin. For this reason, both sides decided to cancel the contractual relationship,” said the FSV club.

“No city in the world has closer ties to Israel than we do, and yet Israeli citizens are being discriminated against right here at JFK. It’s not only illegal; it’s an affront to who we are,” said de Blasio, prior to his election victory. 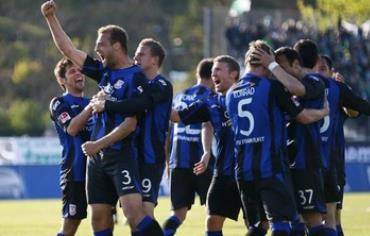 “We won’t stop with just exposing these practices.

We’ll pursue this with authorities in Albany and in Washington until Israeli nationals’ rights are respected,” he said.

German Jews and a Jewish soccer club had criticized the contract between FSV and the Saudi Airline.

According to the Frankfurter Allgemeine Zeitung paper, the president of the club Maccabi Frankfurt, Alon Mayer, said it is a slap in the face and “I now see the previously highly valued club FSV with different eyes.”

Alex Feuerherdt, a German Journalist who writes about anti-Semitism and football, told The Jerusalem Post on Wednesday “for Saudia that would have an upgrade of its brand name” if the sponsor contract with FSV had been approved.

Feuerherdt welcomed the FSV decision to terminate the agreement with Saudia.