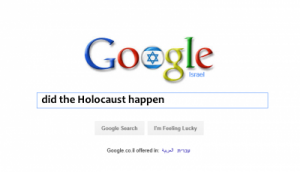 Until recently, the top result the search engine provided to the query was a link to Stormfront, a white supremacist online forum, and an article titled “Top 10 reasons why the Holocaust didn’t happen.”

In an interview with NBC News on Tuesday, a spokesman for Google did not directly address the controversy, but said, “We strive to give users a breadth of diverse content from a variety of sources, and we’re committed to the principle of a free and open web. Judging which pages on the web best answer a query is a challenging problem and we don’t always get it right.”

Google announced it had removed the article from the top of its search results in the United States and Britain this month, and was working to provide “authoritative results.”

In a statement, the search engine giant said it had “made improvements” to its algorithms to provide “more high-quality, credible content on the web.”

The search result was first reported by The Guardian, and received overwhelming condemnation from professionals in the field and Holocaust memorial organizations.