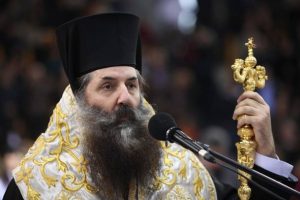 Following  the Synad’s decision to replace Bishop Seraphim, the Metropolitan of Piraeus with Metropolitan Athinagoras of Ilion, Seraphim accused Israel of preventing his visit and interfering in an internal Church matter.

In a statement, Seraphim said that Orthodox Christians stand against Zionism and “especially against the wing of Zionism that seeks world domination”. He similarly accused all other Christian denominations of being in favour of Jews, while also quoting the Protocols of the Elders of Zion and referring to freemasonry as the arms used by Zionism to secure infiltration and state manipulation.

The Central Board of Jewish Communities in Greece condemned the statement, while the Greek Helsinki Monitor filed a lawsuit against Seraphim for antisemitism.

“Once again, we are not surprised with the new delirium of the Orthodox Metropolitan of Piraeus, Seraphim, published on the official webpage of the Archdiocese of Piraeus,” the community said in a statement. “Despite his earnest efforts to dismantle the accusations of antisemitism, in his lengthy writings he refers to antisemitism as anti-Zionism, using well known antisemitic stereotypes, conspiracy theories and traditional Jew-hating attitudes, in order to be characterised not as antisemite but as anti-Zionist.”

“The Central Board of Jewish Communities in Greece kindly asks His Beatitude Archbishop Ieronymos and the Hierarchs of the Church of Greece to isolate the extreme racist and antisemitic views circulating within the Church, which poison Greek society and undermine the harmonious co-existence of all Greek citizens, regardless of gender, skin colour or religion,” the statement concluded.