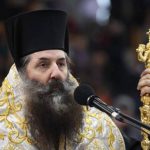 Following  the Synad’s decision to replace Bishop Seraphim, the Metropolitan of Piraeus with Metropolitan Athinagoras of Ilion, Seraphim accused Israel of preventing his visit and interfering in an internal Church matter. Continue Reading »