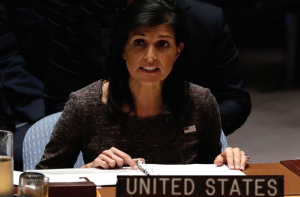 Most of the Palestinians killed by Israel during the ongoing “Great March of Return” protests were shot by snipers on the border, while a few others were killed by Israeli artillery or air strikes.

The Israeli army says its troops only open fire in self-defense or to stop protesters attempting to breach the barrier separating the territory from Israel. At the same meeting, Israel’s envoy Danny Danon said the “vast majority” of those shot were members of terrorist organizations.

Haley did not address the issue of Israel’s conduct during the demonstrations, despite criticism from the EU and a top UN representative.

She denounced the use of civilians as human shields throughout the Middle East in her remarks to the council as it met to discuss the situation in the region and the violence in Gaza.

“It’s difficult to think of a more cowardly act — even for a terrorist — than hiding behind innocent civilians,” she said.

The United Nations has called for an independent investigation of the violence in Gaza, where Israel has fought three wars since 2008.

Addressing the council, UN envoy to the Middle East Nickolay Mladenov urged Israel to “minimize the use of live fire” and stressed that “lethal force should be used only as a last resort.”

Hamas and the protest leaders must, in turn, keep away from the fence and children should be particularly protected, he added.

The former Bulgarian foreign minister’s remarks were markedly more restrained than comments he made on Twitter in the immediate aftermath of the death of a 15-year-old boy by Israeli fire, when he said Israel “should stop shooting children” and its conduct was “outrageous.”

“Gaza is coming apart as we speak under the pressure of an explosive combination of negative humanitarian, security and political factors,” the envoy said at the UN meeting, repeating his warning from previous meetings that the situation in the strip is “explosive.”

Palestinian youths operate a large slingshot in Gaza in their attacks on IDF soldiers. April 20 2018.  Photo: Aaed Baker in Gaza

The Palestinian Permanent Representative to the UN, Riyad Mansour, said the protests have been peaceful and accused Israel of illegally killing “unarmed and defenseless Palestinians.”

The protesters are demanding the right to to return to their ancestral homelands in what is now Israel.

The United States has twice blocked draft statements from the council expressing concern about the violence in Gaza.