Haley: UNRWA must reform for US cash; Mideast states should finance agency 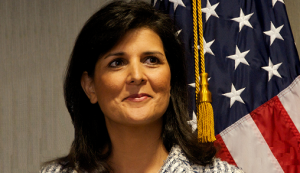 UNRWA, the body responsible for Palestinian refugees, needs reforms if the Trump administration is to fully support it, US Ambassador to UN Nikki Haley said on Tuesday.

Haley, who spoke at the Foundation for Defense of Democracies summit in Washington, further accused the Palestinian Authority of “bashing” the US while expecting Washington to support Palestinians financially.

On Friday, the US State Department announced it will slash over $200 million in economic aid to the Palestinian territories of Gaza and the West Bank, which caused the Palestinian Cabinet, headed by Prime Minister Rami Hamdallah, to condemn the move in an official statement on Tuesday.

The move was slammed by the Palestinian leadership as “blackmail” and “bullying.”

Haley also said that the US seeks to change the discussion over the Palestinian “right of return,” without specifying how.

Washington will say in a policy document that only 500,000 people can legitimately be considered Palestinian refugees, said the Hadashot report, which did not cite any sources.

Under UNRWA’s definition, there are five million Palestinians eligible for its services, including those who fled what is now Israel in the war that surrounded its creation and their descendants.

According to the TV report, the US government will “effectively” reject the Palestinian “right of return,” possibly the biggest sticking point in the resolution of the Israeli-Palestinian conflict.

Earlier this year the administration of President Donald Trump scythed $250 million from its funding to the UN body, which is the only UN organization that is mandated to deal exclusively with one set of refugees. Other countries pledged to help fill the gap.

Jobs cuts at the organization flowing from the funding squeeze have triggered protests by the body’s employees in Gaza.

Haley also called the UN’s bias against Israel “pathetic” at the conference in Washington on Tuesday and that the US withdrew from the UN Human Rights Council in order not to give it legitimacy.