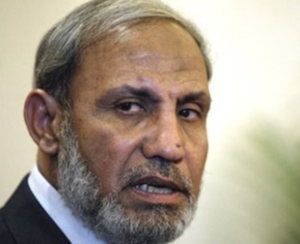 Speaking at a massive rally in Gaza’s Khan Younis organized by Hamas in support of the Islamist rioters attacking police on the Temple Mount, al-Zahar slammed the PA for not openly conducting attacks against Israel.

“If (Hamas’s) Al-Qassam Brigades, (Islamic Jihad’s) Al-Quds Brigades and the forces of the struggle were to adopt the policies and the leaders and countries around them, they wouldn’t be waving the rifle at the settlers, as their advice doesn’t give us strength to confront the occupation and its soldiers.”

Al-Zahar said the PA’s security cooperation with the IDF is “spying for the enemy,” reports Al-Risalah.

He said that “those who admit to doing it (i.e. ‘spying for the enemy’ – ed.), their fate is execution by hanging,” in a direct threat against the PA and its chairman Mahmoud Abbas.

Al-Zahar said that “blood spilled in the way of Allah” for the Al-Aqsa Mosque on the Temple Mount is “holy,” in a call for more violence. That call came just hours before three rockets were fired from Gaza, prompting an Israeli airstrike on a Hamas base in response.

Turning his attention to the future, al-Zahar said that Judea and Samaria is the most important place for the “liberation of Palestine,” and that in the end “we will reach Jerusalem and Haifa.”

“The day will come when buses will leave from Rafiah through the Gaza Strip to Al-Aqsa Mosque,” he added, even though Israel has been allowing hundreds of Gazans to visit the mosque on Fridays for the last several months.