Hamas leader: No peace, no deals, we want all of Palestine in its entirety

Hamas’s Mahmoud Al-Zahar urges members of Hamas & Islamic Jihad never to mention the term “1967 borders,” adding, “We have liberated Gaza, part of Palestine, but I am not prepared to accept just Gaza…our position is: Palestine in its entirety, and not a grain of soil less.”

Senior Hamas leader Mahmoud Al-Zahar recently declared that “removing the Jews from the land they occupied in 1948 is an immutable principle” in the Koran.

Speaking to Hamas’s Al-Aqsa TV on March 8, Al-Zahar also made clear, “Our position is: Palestine in its entirety, and not a grain of soil less.” Continue Reading » 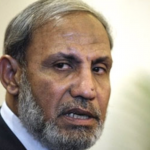 Speaking at a massive rally in Gaza’s Khan Younis organized by Hamas in support of the Islamist rioters attacking police on the Temple Mount, al-Zahar slammed the PA for not openly conducting attacks against Israel. Continue Reading »

A senior Hamas leader called Wednesday for the formation of Palestinian terrorist groups loyal to his Gaza-based Islamist movement in Lebanon and Syria for attacks on Israel.

Mahmud Zahar told reporters in the Gaza Strip that Lebanese and Syrian branches of the Al Qassam Brigades, Hamas’ armed wing, should launch attacks on Israel “to help us liberate Palestine”.

He also denied “any interference” by Hamas in Egypt, which last month declared the Brigades a terrorist group and accused it of aiding a spate of militant attacks on security personnel in the restive Sinai Peninsula. Continue Reading »

Hamas official Mahmoud Zahar, declared the constant cycle of violence in Jerusalem an “intifada” on Saturday night, making rumors of a so-called “silent intifada” official despite declarations from the Israeli security establishment that statements to that effect are exaggerated.

“Escalating the resistance in the city is the solution to Israeli aggression,” Zahar told Hamas news agency Al-Risala.

“The security coordination is a problem in that is suppresses the intifada against Israeli aggression,” he stated. Continue Reading »

Hamas official: Destroying Israel would be easier from the West Bank

“[Some] have said Hamas wants to create an Islamic emirate in Gaza,” Mahmoud al-Zahar a senior Hamas official tells Palestinian news outlet Al-Ayyam. “We won’t do that, but we will build an Islamic state in Palestine, all of Palestine.”

If Hamas manages to establish a foothold in the West Bank, it would be able to wipe out Israel and establish an Islamic state in its stead, senior Hamas official Mahmoud al-Zahar told Palestinian news outlet Al-Ayyam on Wednesday.

The interview, translated and posted by Palestinian Media Watch on Sunday, revealed Hamas’ previously covert intention of taking over the West Bank.

One of Hamas’s most influential voices, Mahmoud Al-Zahar, says unity deal will not change Gaza status quo, dismissing Abbas’ promises that the Palestinian unity agreement will ever recognize Israel.

A Palestinian unity deal will not lead Islamist group Hamas to recognize Israel’s right to exist and will not result in any Gaza militants coming under President Mahmoud Abbas’s control, a senior Hamas official said on Tuesday. 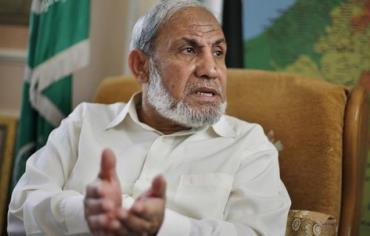 Veteran Hamas strategist Mahmoud Al-Zahar told Reuters the group, which runs the Gaza Strip, was waiting for Abbas to form a unity government, but said the Palestinian leader was taking his time in an effort to overcome US and Israeli opposition. Continue Reading »