Hamas publicizes price scale for those killed/injured during ‘peaceful’ protests 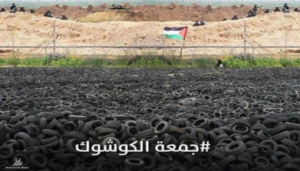 Families of potentially killed/injured militant instigators in Friday’s upcoming protests in which Hamas has rioters burning thousands of car tires, are to be given $3,000 according to the price-list published by the draconian ruling group.
– Warnings of impending environmental disaster and the Gazans harmed from the poisonous emissions, have undeterred Hamas from the  scheduled burning of thousands of tires.

The Hamas terror group announced Thursday that it would pay families of Palestinians who are killed or wounded during the upcoming Gaza border protests, with the next one set to take place on Friday.

The money would be given, it said, “as compensation within the framework of the social and national responsibility of the organization.”

The publication of its new financial scheme comes a day before the renewal of the mass marches staged by Gaza’s residents, whose leaders have threatened to escalate tensions on Friday, launching the sequel to last week’s “March of Return” demonstrations in what has been dubbed “Tire Friday” by Hamas.

Since last Friday, during which some 30,000 Gazans flocked to the border, 20 Palestinians have been killed, 17 of whom were killed during the mass march. Hundreds more have been wounded.

Israel says that those who were shot dead constituted a security risk and approached no-go zones on the border. Moreover, 11 of the 17 were said to be Hamas activists.

Due to the IDF’s use of snipers during last Friday’s March of Return riots along the Gaza security fence, protesters are resorting to the use of mirrors to blind IDF soldiers and to burning thousands of tires to create thick blankets of smoke to obscure them from sight.

However, after Israel’s warnings that the burning of thousands of tires could have negative ecological effects, some voices in the Hamas-ruled enclave could also be heard opposing the new tactic.

A Gaza resident and academic published a post on his Facebook page criticizing Hamas for giving a green light to the environmentally-damaging measure.

“Hamas decided to collect 12,000 tires to burn on the Gaza border on the basis that is harms the Israeli enemy. Hamas should know that wild behavior like this lends credence to the Israeli claims that the Palestinians are a hooligan people that don’t deserve to live. This claim stems from the fact that the burning of tires is harmful to all people,” he wrote.

“It is worth Hamas knowing that the winds, which are usually westerly, will be easterly on Friday due to the bad luck that won’t leave Hamas as long as it continues lying to its people,” he continued, despite the risks of voicing such public criticism.

The post, a rare public criticism in the strip of the draconian movement, prompted numerous responses.

A few hours later, it was erased by the academic. It was not known, however, whether he chose to delete it of his own volition due to the acrimonious response is triggered, or out of fear that he would be arrested.

Dr. Ahmed Khilas, an environmental expert in the strip, also voiced his opposition to the tire-burning plan. The forecast winds, he said, would in fact harm the Gaza residents more than anyone else.

“Smoke rises from the burning tires and poisonous chemicals are emitted. The inhalation of it, or its contact with the eyes or skin, directly affects health, in addition to the destructive impact on other organisms and the agricultural land, air and water.”