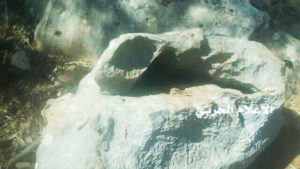 The rock that allegedly held the hidden device was reported to be equipped with a thermal camera that is able to record visuals during the day and night.

“This discovery comes while the enemy is holding army maneuvers in northern Israel while specifically focusing on the border area,” said Hezbollah’s website.

Lebanese news website A-Nashra quoted a source in the Lebanese army who said a patrol of the army’s intelligence corps found the object near the Rawisat outpost and is working to dismantle it along with army engineering.

Earlier Saturday, Lebanon’s Foreign Ministry stated it will file an “urgent complaint” against Israel with the United Nations Security Council over claims Israel violated Lebanon’s airspace while conducting an airstrike against a Syrian government installation on Thursday.

This attack on the Syrian Scientific Studies and Research Center (SSRC) located in the western outskirts of the Hama district allegedly killed two soldiers, the Syrian army claimed.

The Syrian army went on to caution against the “harsh ramifications these belligerent actions may have on the region’s security and stability,” and made clear it’s “determined to obliterate terror and root it out from every inch of Syrian land, regardless of the assistance given these terrorist gangs.”

The Syrian regime’s SSRC was tasked with developing missiles as well as chemical weapons. The center, a contemporary of the Israeli Rafael Advanced Defense Systems, was known for making S-60 missiles that were then handed over to Hezbollah. It’s also one of the locales mentioned as a prospective site for an Iranian precise missile factory.

Israel cautioned recently it would not accept the construction of factories manufacturing precise weaponry for Hezbollah.

The IDF Spokesperson’s Unit refused to confirm or deny these reports.