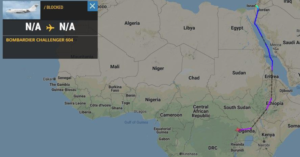 The plane took off from Israel early last week for the capital of the Democratic Republic of Congo and made its return to Ben-Gurion Airport in the skies over Sudan.

An untitled Bombardier Challenger aircraft is what made the historic flight. – Photo: Aero Icarus/Wikimedia

The flight comes after Prime Minister Benjamin Netanyahu met with Sudanese interim leader Abd al-Fattah al-Burhan in Uganda earlier this month. Burhan said his country would now allow Israeli planes – with the exception of flag carrier El Al – to use its airspace.

The plane does not have an Israeli license number but is hangared at Ben-Gurion Airport.

In the past, there have been several cases of planes flying either to or from Israel using Sudanese airspace, but they all had to stop over at Amman or another destination so that the flight would not be registered as Israeli.

According to the plane’s log, it took off from Israel to Congo on Monday evening, using a route that passed over the Suez Canal, Eritrea, Ethiopia, Kenya and Uganda, on a flight that took a little less than 7 hours.

“The picture for Sudan changed a lot after I met with Netanyahu,” Burhan said at a press conference after his talks with the prime minister.

“The meeting was held without conditions and was coordinated by Washington. The results of the meeting will be announced soon, first and foremost improving the economy. The government will examine the issue of cooperation and then update Israel,” he said.

Sudan is a Muslim country in northeastern Africa, with a population of more than 43 million. It does not have diplomatic relations with Israel although pundits believe that by establishing a relationship with Israel and ending its diplomatic isolation, the Sudanese leader aims to help his country go through a process of modernization.