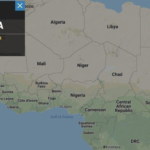 The plane took off from Israel early last week for the capital of the Democratic Republic of Congo and made its return to Ben-Gurion Airport in the skies over Sudan. Continue Reading »