For the first time in history, the president of the State of Israel will make an official presidential visit to the United Arab Emirates (UAE). President Isaac Herzog, and his wife Michal, will leave on Sunday, January 30, 2022 for Abu Dhabi at the invitation of Crown Prince Sheikh Mohammed bin Zayed. 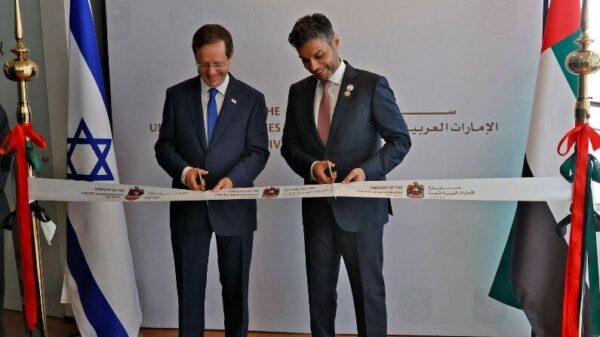 During the visit, the president will visit Abu Dhabi and Dubai and hold official meetings with Sheikh Mohammed bin Zayed, as well as with the Minister of Foreign Affairs, Sheikh Abdullah bin Zayed, Minister of Defense and ruler of Dubai Sheikh Mohammed bin Rashed Al Maktoum, as well as representatives of the Jewish community. The President will open Israel Day at the Expo 2020 exhibition hosted in Dubai.

President Isaac Herzog said ahead of his visit:

“We get to make history by making the first visit of the President of the State of Israel to the UAE. This important visit takes place at a time when the people of Israel and the people of the Emirates are working hard to lay the foundations for a common new future.

“I believe that this new and courageous partnership will bring about positive change in the Middle East and inspire the entire region. We are peaceful peoples, and together we will expand the historic circle of peace of the Abraham Accords and its implications, and create a better, more tolerant and safer world for future generations.

“I thank Sheikh Mohammed bin Zayed for his kind invitation, which is a historic opportunity to deepen the friendship between our peoples.”

Trump’s thinking ‘outside-the-box’ to change the paradigm has auspiciously transformed the mid-East, turning Israel into a positive influencer, power-player and proud ally to numerous Islamic states…
something unimaginable and proven completely contrary to what Obama’s simpleton, but arrogant John Kerry vehemently proclaimed just 6 years ago:
“There will be no separate peace between Israel and the Arab world! – No, No, No and No! ”

… and of course, years after being proven a total failure as Secretary of State for Obama, it did not influence Biden in choosing this dinosaur as his ‘Climate Tzar’.

Even more disturbing, as far as Israel is concerned, is how Biden’s hand-picked stooges are so determined to undo ‘anything Trump’, this administration is trying to return to the 45-year-old, failed, Carter-era mid-East policies, that have only damaged the region.