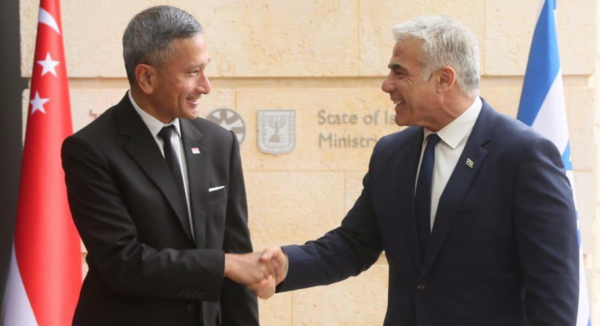 After decades of ‘good and special relations between the two countries’, Singapore and Israel sign Memorandum of Understanding, agreeing to finally open an Embassy of Singapore in Israel.

Singapore will establish an embassy in Israel, as part of a series of agreements reached between the two governments, Singapore’s Ministry of Foreign Affairs announced Monday afternoon. 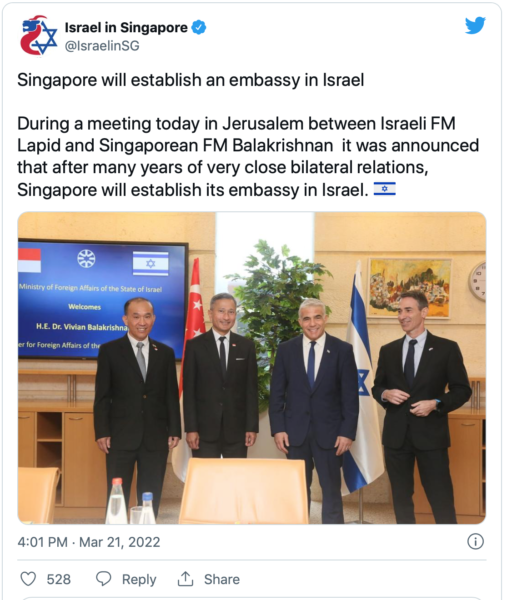 Balakrishan also met with Israel’s Minister of Innovation, Science and Technology Orit Farkash-Hacohen, with the two signing a memorandum of understanding on cross-border cooperation and on artificial intelligence.

“The MOU signals both countries’ intent to accelerate cross-border collaborations in AI, and supports the development and deployment of AI for collective benefit,” the Foreign Ministry said in a statement.

“Dr Balakrishnan highlighted that the Singapore and Israel should deepen collaboration in emerging areas such as agri-food tech, health-tech, AI and digitalisation, as the world emerges from the pandemic.”

In addition, Singapore agreed to open an embassy in Israel, with Foreign Minister Balakrishan informing Lapid of his country’s plans during their meeting Monday.

Singapore currently has an honorary consulate-general in Tel Aviv.

The embassy is set to be established in Tel Aviv as well.

Today, my friend Singaporean FM @VivianBala informed me of his country’s decision to open an embassy in Israel for the first time since our countries established diplomatic relations. This decision is further evidence of the good & special relations between our countries. 🇮🇱 🇸🇬 pic.twitter.com/G58GcDgkc7

Despite having diplomatic relations since 1965, Singapore has hitherto never established an embassy in Israel, while Israel maintains an embassy in Singapore.

“I welcome the Government of Singapore’s decision to open an embassy in Israel for the first time since our diplomatic relations were established. This is further evidence of the good and special relations between our two countries,” Lapid said Monday afternoon.

Ever since President Trump pushed for the Abraham Accords and exposed the Palestinian leadership as intransigent hate-mongers, protecting the status quo just to increases their personal fortunes (after all, which Palestinian leader…past or present, isn’t a billionaire or mega-millionaire?), world leaders are no longer bullied by them to boycott Israel for the sake of the ‘Palestinian lie’.

The ‘Palestinian House of Cards’ is falling and Israel’s excellence in so many fields is now openly sought after.
These are but a few off the top of my head….

Peace with Israel is good for

for the entire world…

EXCEPT the PLO and Hamas leaders.

In the future, pay attention as to who works to delegitimize & demonize Israel!

Unless there’s a way to exclude all PLO & Hamas members from leadership,
anyone who ‘advocates’ for a ‘State of Palestine’,
is actually working to condemn the people to a future
of misery and little, or very few, human rights.