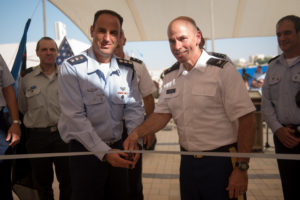 The base will serve dozens of U.S. Army personnel serving in Israel and is the first permanent American base on Israeli soil.

A decade ago, the U.S. military built a communications facility for the coordinated defense of Israel. In the past, the facility was run by both American military personnel and contractors, but the contractors were eventually replaced by soldiers as part of a larger process the U.S. military underwent.

The IDF said that the new base was established thanks to specialized infrastructure and coordination between officials from the IAF and the U.S. Army.

Air Defense Commander Brig. Gen. Zvika Haimovich said that this is the first time the U.S. Army has had a closed base with a U.S. Army flag flying inside an IDF base, which represents years of military collaboration and strategic commitment between the countries. “This is a historic, exciting and important moment that adds another pillar to the defense of the State of Israel,” he said.

Haimovich also announced that another Iron Dome air defense battalion was established last week, adding to the one already in existence.