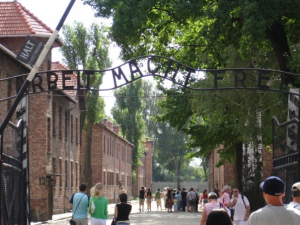 The Shem Olam Institute, located in a small village in central Israel and which includes a small museum, focuses on religious life during the Holocaust, and has so far trained some 20 guides for Holocaust study trips in Poland. The institute made the announcement Thursday in a statement to media.

The goal of the switch is to “reduce the number of delegations to Poland, which constitute a major touristic element, and even hurt the ‘touristic’ inflow of roots trips and thereby send across a clear message of rejection of the state’s interference with the narrative of the Holocaust.”

In January, Poland’s parliament passed a measure that outlawed rhetoric in which Poland is blamed for Nazi crimes, triggering angry reactions of Jewish groups that said this amounted to Holocaust revisionism.

“The Polish people is trying to deny its crimes during the Holocaust but the main problem is the Polish government, which is adhering to a worrisome policy lately of Holocaust denial and anti-Semitism,” Rabbi Avraham Kriger, Shem Olam’s director, said. “It is time to stop the river of millions of dollars flowing into Poland each year” through the trips, he added.

Poland has denied that its law is designed to deny the Holocaust, arguing it serves to prevent attempts to abuse the genocide’s memory. It has also said it is committed to fight anti-Semitism, whose prevalence in Poland is low relative to Western countries and has recently diminished in scope, according to official figures.

Ukraine, which reportedly has a rising anti-Semitism problem, passed a similar law in 2015, which forbids “insulting the memory” of anti-Communist partisans, including those who fought with Adolf Hitler and murdered Jews. It was met with a far fainter reaction than the one triggered by the law in Poland.

Both Ukraine and Poland were occupied by Nazi Germany, and saw widespread collaboration as well as resistance by the local populations. Unlike in Ukraine, the Nazis did not recruit Polish volunteers to fight in their army. Ukrainian authorities have named streets for some Nazi collaborators and in Lviv the municipality hosted a march featuring SS uniforms earlier this year.

In April, 57 U.S. congressmen co-signed a letter condemning the Polish law, but which used far harsher language on how Ukraine “glorifies Nazi collaborators,” as the authors said.

Ukraine, Kriger said, “has its problems, which are serious. And it has a dark history of collaboration, perhaps more prevalent than in Poland.” But, he added, “there is less support for revisionism on the government level. There is more respect for commemoration.” He added that Shem Olam had been looking to expand its activities beyond Poland for years.