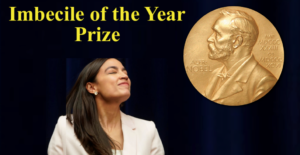 “The people on the border aren’t forced to be there – they go there on their own will,” he said. “If someone doesn’t know the difference, either they’re playing stupid or they just don’t care.”

“Her statement is evil. It hurts a lot of people. At the concentration camp, we were not free. We were forced there by the Germans who executed and murdered people – there’s no way you can compare.”

Mosberg told the New York Post that he believes the congresswoman is uninterested in learning and fixing, what he says is, a grave error.

“She doesn’t want to learn – she’s looking for excuses,” he said. “I would like to nominate her for the Nobel Prize in stupidity.”

Earlier this month, Ocasio-Cortez caused controversy by her choice of terminology when describing the detention centers.

“The US is running concentration camps on our southern border, and that is exactly what they are,” the freshman New York Democrat said in an Instagram Live video. “If that doesn’t bother you… I want to talk to the people that are concerned enough with humanity to say that ‘Never Again’ means something.”

“Never again” has long been associated with the pledge to never let the atrocities of the Holocaust be forgotten and to ensure they can never happen again.

Mosberg was not the only one to criticize the terminology used by the young congresswoman.

Holocaust survivor Celina Biniaz, who survived Auschwitz with the help of Oskar Schindler, told the Los Angeles Times that she, too, does not believe the term “concentration camps” is the correct term for the detention centers in the United States.

But she also told the Times that she considers the centers to be deplorable and believes US President Donald Trump should be doing more to end the poor treatment of the migrants.

Earlier this month, Yad Vashem called on Ocasio-Cortez to educate herself about the Holocaust and about Nazi concentratin camps.

“.@AOC [Alexandria Ocasio-Cortez], Concentration camps assured a slave labor supply to help in the Nazi war effort,” the world Holocaust remembrance center tweeted, “even as the brutality of life inside the camps helped assure the ultimate goal of ‘extermination through labor.'”

Mosberg and his Holocaust-education organization From the Depths had invited Ocasio-Cortez to join them on a trip to see the German Nazi concentration camps in Poland in an effort to educate the 29-year-old about the atrocities that occurred in World War II.

A representative for Ocasio-Cortez told the New York Post that “She made a distinction between a death camp and concentration camp. She’s been pretty outspoken about the issue.”

Ilanit Chernick contributed to this report.