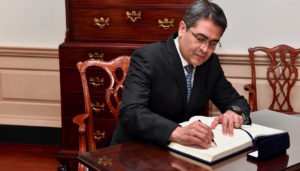 According to Channel 2 Sunday, the Hernandez administration is prepared to move the Honduran embassy to Jerusalem, and as has even drawn up a plan for undertaking the move, with a possible site already chosen for a Jerusalem embassy.

President Hernandez has dispatched a senior diplomatic team to Israel, which met with the director-general of the Israeli Foreign Ministry, Yuval Rotem.

While the team expressed Honduras’ willingness to relocate its embassy in Israel, the diplomatic team added that it expected that Israel reciprocate with its own changes vis-à-vis its relationship with Honduras.

Chief among the Honduran requests is the call for Israel to upgrade its diplomatic mission in Honduras by opening a full embassy. At present, Israel only maintains a consulate in Tegucigalpa.

The cost of maintaining a full-fledged embassy has been estimated at one million dollars a year.

Other demands include closer economic ties, as well as technical assistance from Israel.