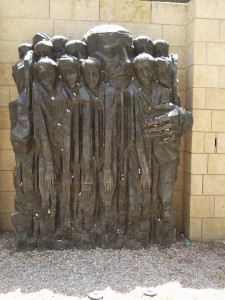 Some of the members of the Yazidi and Kurdish delegation at Yad Vashem on Sunday unfurl a Kurdish flag at the entrance. They were accompanied by Dr Susanna Kokkonen, director of the Christian Friends of Yad Vahsem (far left) and Lisa Miara (third on left), founder of the Spring of Hope Foundation. – Photo: SETH J. FRANTZMAN

For the Yazidi and Kurdish delegation touring the museum these were stories that rang true back home in Iraqi Kurdistan where some 300,000 Yazidis have become refugees from persecution by Islamic State.

For the six visitors, the traumatic experience on Sunday of walking through the cement-shrouded museum seeing displays of Nazi brutality was jarring. The group had come to take part in a multiday conference this week at the capital’s Mishkenot Sha’ananim hosted by the Spring of Hope Foundation and dedicated to providing a platform for the voices of persecuted religious and ethnic minorities. The delegation included Sherzad Mamsani, the director of Jewish affairs for the Kurdistan Regional Government, Saeed Khudeda Alo, a lecturer at the University of Duhok, and Khaleel al-Dakhi, a Yazidi lawyer and activist who has helped rescue people from ISIS slavery.

Yazidis are an ancient religious group who live mostly in northern Iraq and were targeted for extermination by ISIS in 2014. In the last year 22 mass graves of Yazidi men and elderly women executed by the terrorist group have been found, and several thousand Yazidi women remain enslaved by ISIS.

“The Yazidis are concerned with their day-to-day needs and their lives. They lost everything,” says Mizra Dinnayi, who runs Luftbrücke Irak, a German humanitarian organization.

At a short speech to the group, Dinnayi, who is Yazidi, spoke of the bonds between his people’s suffering and that of Jews.

“We ask ourselves how could this happen in the 21st century that women could be sold? What is painful for me was what happened to the Jewish community and everyone was watching and millions were killed. The same thing is happening [today], the international community saw what happened and was watching.”

He says that when he talks about genocide happening to Yazidis, he finds in Israel people who can understand and what it means to be a victim.

But there is an essential difference: “You have a state, I have no state, you have land, I have no land; how can we protect ourselves?” Dr. Robert Rozett, director of libraries, Yad Vashem, told the group, “It is appropriate that we meet here. The Holocaust is a specific incident of genocide in which Jewish communities were destroyed, so it is specific but also universalist, and what we read in the press is that similar things are happening to your [Yazidi] people.”

For some the sheer scale of the Holocaust and systematic mechanical extermination cannot be compared to what happened in Iraq in 2014 when ISIS separated men and women and executed the men, or used them in slave labor before killing them.

Dawod Aliaga, a 23-year-old Yazidi refugee from the town of Snune near Mount Sinjar, agrees the numbers may not be the same, “but they [ISIS] did the same thing. The executions, hangings.”

The tall young man says it was his dream to come to Israel.

Last year, like many thousands of other Yazidis, he joined the Kurdish peshmerga military forces that liberated Sinjar city from ISIS. He proudly shows photos of himself on his phone, AK-47 in hand, in areas re-taken from the extremists. “We are both minorities, and they [Jews] feel our pain, the same pain, and we want our rights like Israel has rights.”

There is a feeling that Israel’s model and learning about the Holocaust can serve as both lesson and inspiration for Yazidis and in Kurdistan. But Dinnayi stresses that for many Yazidis in refugee camps, unable to return home to ruined villages, some of which are still controlled by ISIS, and unsure of their future, daily survival is on most people’s minds.

But for those like Lisa Miara, the founder of Spring of Hope, which worked hard through the Israeli bureaucracy to bring these Iraqi citizens here, the struggle is worth it. “When I met Dawod he was very pessimistic, and I brought him The Diary of Anne Frank and [books by] Elie Wiesel. You can stay a victim in a camp or you can take inspiration and say we will push on ahead.”