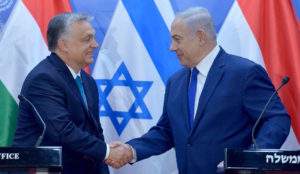 The clashes come amid broader fears that Hungary, Poland and other eastern countries from the former Soviet-bloc were turning away from the democratic values on which the EU is built.

The commission denounced as illegal the so-called “Stop Soros” laws passed last month, which include a punishment of up to a year in prison for anyone assisting any other person who entered Hungary illegally.

It sent a “letter of formal notice” to Budapest, the first step of a procedure that could go before the European Court of Justice, the bloc’s top tribunal.

“The Hungarian authorities have two months to respond to the Commission’s concerns,” the commission said.

The legislation was dubbed the “Stop Soros” laws after liberal US billionaire George Soros, accused by Orban’s government of orchestrating migration to Europe.

In other action, the commission said it was taking Hungary to the top court for failing to resolve complaints made in December 2015 that it held asylum seekers for too long in transit center and did not treat them properly.

“The border procedure implemented by Hungary is not in compliance with EU law as it does not respect the maximum duration of four weeks in which someone can be held in a transit center,” the commission said.

In violation of EU rules, it added, irregular migrants were escorted back across the border even if they want to apply for asylum.

Following US President Donald Trump’s administration, Hungary said Wednesday it was withdrawing from a UN pact on migration, saying that the global deal encourages movements of people which are “dangerous for the world.”

Hungary’s Prime Minister Victor Orban drew the ire of the local Jewish community in the run-up to April elections with a poster campaign targeting Soros’ pro-refugee and pro-immigrant stance.

Critics said the posters, which displayed a portrait photo of the Jewish billionaire with the text “let’s not let Soros have the last laugh”, played into anti-Semitic stereotypes.

On Thursday, Orban however denounced anti-Semitism on his first visit to Israel.

The Hungarian Prime Minister told his Israeli counterpart, Benjamin Netanyahu at a joint press conference at the Prime Minister’s Office in Jerusalem, that Hungary has “zero tolerance for anti-Semitism”, which in modern times could come in the form of anti-Israel behavior.

“I can assure the prime minister that Hungary has a policy of zero tolerance towards anti-Semitism,” Orban said during remarks alongside Netanyahu ahead of their talks.

Speaking in Hungarian, Orban said he was proud Jews in Hungary could freely identify themselves comfortably and he vowed to cooperate with Israel on the war on anti-Semitism, purportedly declining in Eastern Europe while rising in Western Europe.

Speaking first, the Israeli premier set the agenda, saying that “the past is always before us because anti-Semitism continues….”

Netanyahu proceeded to emphasize his usual points of interest, describing the threat of radical Islam the “Iran (as) the greatest threat”, adding that “in many ways, Israel is defending Europe,” as he thanked Hungary for also defending Israel.

Hungary in December abstained when the United Nations General Assembly voted overwhelmingly to reject the US recognition of Jerusalem as Israel’s capital.

It also joined the Czech Republic and Romania in blocking a European Union statement criticising Washington’s decision to move its Israel embassy to Jerusalem.

“You have stood up for Israel time and time again in international forums,” Netanyahu said. “It is deeply appreciated, and it is important.”

He also welcomed “tremendous opportunities for cooperation” between their nations and commended the Hungarian leader in funding projects supporting Jewish establishments.

Orban, in turn, took the opportunity to emphasize common ground between the two leaders, saying they share patriotic qualities that contributes to their countries’ amicable ties.

“We see eye-to-eye the challenges of the 21st century,” Orban said as he echoed Netanyahu’s common refrain on the threat of terrorism, though he did not mention names.