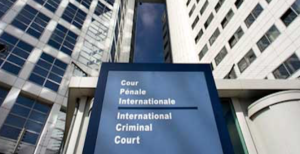 After years of attempting to go after top Israeli political and military officials in courts in Turkey, Europe and before the ICC for the deaths of 10 mostly Turkish Humanitarian Relief Foundation (IHH) activists killed by Israel Navy commandos, the split ICC Appeals Chamber decision keeps the case alive.
The ICC prosecutor can go further with criminally probing Israel, or she can decide to try to close the case for the third time, though her basis for doing so has narrowed.

This means that even within the ICC Appeals Chamber, there is sympathy for closing the case.

The case, filed by IHH Turkish allies on the island of Comoros, has been among the most controversial ever within the ICC system with multiple split votes and numerous rounds of appeals.

ICC prosecutor Fatou Bensouda tried closing the file a first time, saying that while the IDF’s conduct in the incident seemed to her to display elements of war crimes, the 10 activists killed did not constitute a high enough body count to warrant her involvement, since she focuses on mass killings.

Bensouda’s November 2014 decision had been to end her review of the Mavi Marmara raid at a preliminary stage, without ordering a full criminal investigation – let alone filing indictments. It was viewed by the pro-Israel side as an initial victory in the ICC.

But then the ICC Pretrial Chamber voted on a 2-1 split ruling against Bensouda over how to handle the flotilla raid, ordering her to open a full criminal investigation.

Bensouda appealed to the ICC’s Appeals Chamber, and received a mixed result in November 2015.

In a razor thin 3-2 vote against Bensouda’s appeal, the ICC Appeals Chamber ordered her to review her conclusions a second time by looking at some additionally available information, but empowered her to come to the same decision to close the case as long as she performed that review.

In November 2017, Bensouda again decided to close the case against Israel. She explained that after reviewing additional information that even as “there is a reasonable basis to believe that war crimes were committed by some members of the Israel Defense Forces,” but that “no potential case arising from this situation can, legally speaking, be considered of ‘sufficient gravity’… therefore barring the opening of an investigation.”

Crucial to her decision was her finding that, “there was no reasonable basis to believe that the identified crimes were committed on a large-scale or as part of a plan or policy.”

Comoros appealed again and in November 2018, the ICC Pretrial Chamber ordered Bensouda to once again reconsider her decision.

Bensouda appealed again to the ICC Appeals Chamber, which once again did not really bring the case to a conclusion.

Through Monday’s decision, the ICC Appeals Chamber essentially said that Bensouda had given mere lip service to reconsidering and re-fully probing the evidence, telling her that she must perform her re-checking of the evidence more carefully.

More significantly, the Monday decision said that she is bound by the findings of fact and law from the ICC Pretrial Chamber about aspects of the evidence – something which could very well make it difficult for her to close the case again.

Nevertheless and somewhat confusingly, the ICC Appeals Chamber said that Bensouda could still conceivably decide to close the case a fourth time. However, that is less likely because of the ICC courts’ persistent rulings against closing the case.

Previously, Israel has succeeded in closing a range of other cases against it internationally regarding the flotilla. Turkey closed its cases against Israel after the two countries reached an agreement in August 2016. The ICC case is the last notable one that remains open.

The 2010 Mavi Marmara raid saw a group of rights activists, combined with a smaller group of IHH activists – which the quasi-government Turkel Commission Report identified as affiliated with the Muslim Brotherhood – board several ships to try to break Israel’s naval blockade of Hamas in Gaza.

While Israel commandeered and stopped most of the ships without incident, Israel Navy commandos boarded the Mavi Marmara and were attacked by IHH activists, leading to the injury of some commandos and the eventual deaths of 10 IHH activists.

Turkey and many others in the international community accused Israel of war crimes. But the Turkel Commission and the UN-sponsored Palmer Report not only cleared Israel of the said crimes, but validated some of Israel’s claims of fighting in self-defense. The Palmer Report did say that some of the IDF’s use of force was excessive.

The war crimes complaint to the ICC came from the Comoros in May 2013. Because of the law firm that filed the complaint, many viewed the Comoros as undertaking the issue on behalf of various IHH-Turkish contacts.

Bensouda’s preliminary examination of alleged war crimes during the 2014 Gaza war and the settlement enterprise is still open, though there are indications that in November or December she may announce significant developments.

The ICC Appeals Chamber said that Bensouda must report back on her latest decision regarding the Mavi Marmara by December 2, making it likely that all of her Israel-related decisions will come down around the same time.

Obviously, a number of anti-Israel members of the ICC continue to impede the just decision by the Chief Prosecutor of the ICC, Fatou Bensouda, to close this case.

But, this is the absurd, double-standard, Israel has to deal with, in most international forums.

I few well known Israelis got together to address the insanity of the anti-Israel world.