The Int’l Criminal Court prosecutor said  that she would open a preliminary examination into the Israeli raid on the Gaza-bound flotilla, which left 9 Turkish peace activists dead.

The president of the International Criminal Court has taken the first steps toward an investigation of a war crimes lawsuit against Israel over the 2010 raid on the Mavi Marmara.

Sang-Hyun Song of South Korea appointed a three-judge panel to study the procedural requirements for the suit. The appointment puts in place the legal apparatus for an investigation but does not actually launch a probe, The Associated Press reported.

Israel has supplied advanced electronic warfare systems to the Turkish Air Force, marking the first exchange of military equipment with Turkey since relations between the two countries deteriorated in the wake of the Israeli Navy raid on the Mavi Marmara ferry in May 2010.

The deal was reported on Sunday in the Turkish newspaper Zaman and confirmed today by a senior Israeli defense source. Continue Reading »

Latest Flotilla Ship with Activists Sails for Gaza from Naples

In the latest attempt to break Israel’s blockade on Gaza, activists from several countries sail on a Swedish ship from Naples

A Swedish ship with activists from several countries aboard sailed from Naples on Saturday, in the latest bid to break Israel’s blockade on Gaza, AFP reported. The report said that a crowd of well-wishers saw off the sailing vessel Estelle as it left the Italian port as part of the “Freedom Flotilla” movement.

“We think it will take around two weeks to get to Gaza, but it will obviously also depend on the weather conditions,” spokeswoman Ann Ighe said earlier. Continue Reading »

Jerusalem man calls on US A-G to support flotilla lawsuit

A US citizen who filed a lawsuit asking the US authorities to seize the Mavi Marmara and 13 other Gaza flotilla ships has called on US Attorney-General Eric Holder to support the suit, The Jerusalem Post learned on Sunday.

Dr. Alan J. Bauer, an American citizen living in Jerusalem, filed the suit last June in the US federal court in New York with the help of Shurat HaDin (The Israel Law Center). 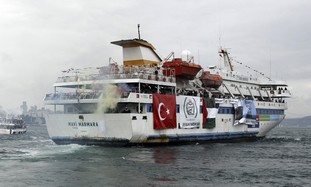 The precedent-setting lawsuit, which has since been transferred to the District of Columbia District Court, asks the US authorities to seize the flotilla vessels on the grounds that groups and individuals – including the Free Gaza and US to Gaza campaigns – violated US law by raising funds in the US to furnish and fit out the ships, whose intent was to commit hostilities against US ally Israel.