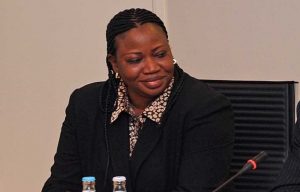 The ship was trying to breach the maritime blockade Israel imposed on Gaza after the Hamas terrorist group seized control of the enclave from rival Palestinian faction Fatah in 2007 in a military coup.

Israel maintains the blockade is necessary to prevent the smuggling of weapons into Gaza.

The 2010 raid, which took place after the Marmara refused to heed the Israel Navy’s calls to turn around, saw eight Turks and one Turkish-American killed and several other pro-Palestinian activists wounded.

Bensouda has acknowledged that war crimes may have been committed in the raid but decided that the case wasn’t serious enough to merit an ICC probe.

On Monday, she repeated that assertion.

“The Prosecutor maintains her view that there is not a reasonable basis to proceed, because there is no potential case arising from this situation that is sufficiently grave,” Bensouda said in a 44-page document.

The order was the latest and likely the last step in a long legal battle to bring the case before the court.

Bensouda first declined a request to investigate the raid in 2014. A panel of pretrial judges asked her to reconsider and she again refused to open an investigation in 2017. That decision was appealed, leading to the order earlier this year to again reconsider.

The original request was made by the tiny Indian Ocean islands nation of Comoros because the Mavi Marmara was sailing under a Comoros flag.

The ICC was set up as a court of last resort intended to prosecute senior leaders allegedly responsible for grave crimes including genocide, war crimes and crimes against humanity when national courts prove unable or unwilling to take on such cases.

Israel is not a member state of the court but its nationals could have faced charges if Bensouda had opened an investigation.

A hardy ‘Well done!’ to Prosecutor Fatou Bensouda for her professionalism and integrity.

She saw with clarity the full nature of the event, from transporting broken wheelchairs & out-of-date medicines that were deemed ‘humanitarian aid hijacked by IDF pirates in international waters’ when in reality a legal Maritime blockade was broken by violent Turkish terrorists planning to engage the Israelis by force.

The farce is portrayed here. Enjoy!