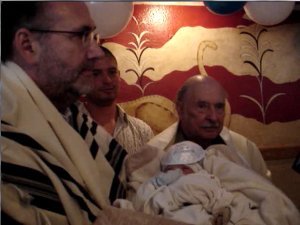 Iceland has no official rabbi. The Chief Rabbi of Denmark Yair Melchior and the Rabbi of Oslo, Yoav Melchior are leading the campaign. They say that the bill was sponsored by deputies of five parties, from the coalition as well as opposition, who describe circumcision as a violation of the rights of the child.

“As it looks now, the bill has a high chance of passing,” wrote the Melchior brothers. “Iceland does not have a significant Jewish or Muslim population; therefore there are hardly any opponents to the bill. Only considerable international pressure can help”The rabbis are requesting that European and worldwide Jewish communities contact their local Icelandic representatives and make their protests known.

Iceland is one of the most secular countries in the world; therefore, it is advised to do so via political leadership, not religious.

The rabbis stressed in their letter that “There is no country in the world now that bans circumcision. This sets a dangerous precedent that may affect other countries; the Danish parliament is now considering such a bill as well.”

The European Conference of Rabbis declared its concern regarding the bill in Iceland and in other countries.

“Circumcision is a critical part of Jewish life and no authority in the world can forbid Jews from carrying out this commandment,” they explained.

The group’s President Rabbi Pinchas Goldschmidt added that “although the Icelandic Jewish community is small, we cannot ignore the dangerous precedent that this law can set and the consequences that such legislation can cause in other countries.

“We call on lawmakers to immediately rescind this miserable piece of legislation and continue supporting Jewish life without limits.”

Female circumcision has been banned in Iceland in 2005. The current bill’s supporters claim that the rights of the child come before the parent’s right to raise their children as they see fit.

The Independent reported that upon reaching the age of consent, which for sexual relations is set at 15 in Iceland, the child would be permitted to perform a circumcision.

It was initiated after Danish doctors advised against circumcising boys below the age of 18.