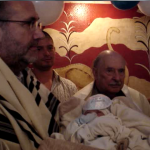 Reykjavik mayor cancels ban on all Israeli-made goods, but plans to revise proposal for a version limited to all Israeli products from Judea and Samaria.

The capital of Iceland’s decision to ban Israeli products is to be withdrawn, Reykjavik Mayor Dagur Eggertsson told the Icelandic Broadcasting Service RÚV on Saturday, according to Iceland Magazine.

The magazine quoted Eggertsson: “Yes, the decision was poorly prepared. In the past I have taken great pride in preparing all big decisions thoroughly. I’ll admit here and now that I am angry with myself for not doing that, and for not having prepared the decision as well as I would have liked to. Continue Reading »

The Few Jews in Island Struggle to Keep the Faith

With no rabbi, no synagogue & a majority of interfaith marriages, Iceland’s few Jews find unique ways of keeping Jewish tradition alive …with a little help from their friends.

By Jenna Gottlieb, The Forward

Iceland has no synagogue, no rabbis, no Jewish community center or organized structure. In fact, Judaism is not even one of Iceland’s state-recognized religions.

Still, Iceland has about 100 Jews who call this North Atlantic island home. And last year, roughly 50 of them gathered in a hall downtown on Erev Rosh Hashanah for services — a proportion of prayer attendance that rabbis in many other countries would give their left arms to achieve.