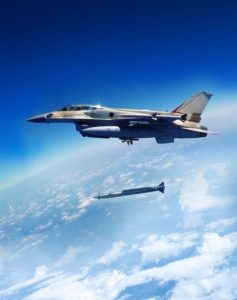 The introduction of the new precision ‘Made in Israel’ rockets significantly improves the IDF’s capabilities of accurately hitting its target from all ranges while achieving lower mission costs.

Israel’s Ministry of Defense has signed a deal to develop and acquire advanced precise short and long range rockets worth hundreds of millions of shekels with Israel Military Industries (IMI).

According to the Ministry of Defense, the precision firepower will significantly improves the IDF’s capabilities of accurately hitting a target from a distance at immediate availability and with a low mission cost relative to other combat systems.

Rocket used by the IAF during tensions at Gaza border in August 2018. – Photo courtesy: IAF

The acquisition of the new rockets follows the decision of Defense Minister Avigdor Liberman to equip the IDF with precision rockets for all ranges.

“We are purchasing and developing high-precision systems that bolster the IDF’s offense capabilities,” said Defense Minister Avigdor Liberman on Monday, adding that some are already in production and others are in the end of the research and development stage.

“The deal for the missile system will allow for the coverage within a few year every point in short and far ranges,” said Defense Minister Avigdor Liberman on Monday of the new rockets which will have advanced technologies to adapt them to the modern battlefield with some of them having a range of 30-150 km.

With the majority of operations fought by the IDF being in urban areas, the accuracy of shells has become increasingly important.

According to IMI Systems Chairman Yitzhak Aharonovitch “the innovative rocket systems that the IDF will receive from this transaction reflects the company’s technological capabilities, which specialize in the ability to fire accurately, to strike at a variety of ground targets.”

Two years ago the surface-to-surface GPS-guided Romach rockets manufactured by IMI become operational in the IDF. Designed to strike targets at a range of 35 kilometers with an accuracy range of under 10 meters, the rockets allow the IDF to strike targets even in the heart of a urban center.

Earlier in August a senior officer in the IDF’s ground forces stated that the military plans to convert 50 percent of the army’s land-based ammunition stockpiles into precise weaponry.

During a large-scale drill held in the Golan Heights in early August the Golani Brigade 13th Battalion fired new precision-guided 122 mm mortar shell which has flight control capability and accuracy of up to five meters.

Israel’s defense establishment has for years been discussing the need for the IDF to have accurate surface-to-surface missiles with a range of 150 kilometers.

According to a February report by Yediot Aharonot establish a vast network of medium-range surface-to-surface missile system to be operated by the ground forces. The initial aspects of the planned missile corps was reported to be completed by 2020 and complement Israel’s multi-tiered missile defense system and an offensive counter to the missile and rocket arsenal held by Hezbollah in Lebanon.

Hezbollah’s arsenal of an estimated 130,000 rockets is comprised of mostly small, man-portable and unguided surface-to-surface rockets and missiles with ranges of between 10km-500km. The group also has several kinds of surface-to-air and land-to-sea missiles.

Israeli officials believe that the Lebanese Shiite terror group will possess over 1,000 precision-guided missiles within a decade.