Commandos from the navy’s Flotilla 13 unit boarded a cargo ship, the HS Beethoven, in the Mediterranean Sea on Sunday night on suspicion it was trying to smuggle weapons to the Gaza Strip. 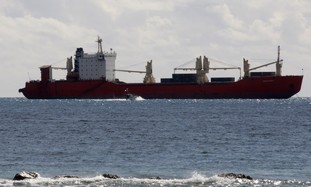 The ship, which was flying a Liberian flag, was intercepted by Israel Navy vessels approximately 260 km. from Israel’s coast. Commandos boarded the ship with the captain’s consent and began searching cargo containers for arms.

IDF officers said that searches aboard the ship could continue until the morning.

The IDF said that the operation was part of a routine patrol and that the ship’s route was likely what raised concern that it may have been carrying weapons for either Hamas or Islamic Jihad in Gaza.

The HS Beethoven left Beirut on Friday and was scheduled to arrive in Alexandria, Egypt, on Monday evening. Before stopping in Lebanon, it had stopped in Limassol, Cyprus. If the ship was carrying arms, they were likely meant to be smuggled into Gaza via tunnels located under the Philadelphi Corridor between Sinai and Gaza.

Last March, the navy intercepted a cargo ship called Victoria that was carrying some 50 tons of weaponry and was on its way to Egypt. It was also flying a Liberian flag and was headed to Alexandria.

The weapons seized on the Victoria included a number of sophisticated radar-guided Iranian anti-ship missiles that were intended for terrorist organizations in Gaza.