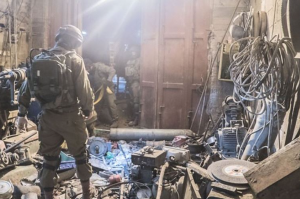 In addition to the 15 lathes, Israel’s security forces discovered 70 barrels full of assorted ammunition for M16’s, Carlo Gustav and other automatic weapons, found hidden in the basement walls.

The facility, found in the basement of a family house, included 15 lathes used to produced weapons components.

In addition to the metal-working machines, security forces found 70 barrels full of hundreds of different types of ammunition.

Ammunition for M16’s and Carlo Gustav rifles was found hidden in the walls of the building along with dozens of other firearm components.

The building owner was arrested with his son and taken in for investigation.

Security forces suspected that the factory had been in operation for a while but an exact amount of time was unknown.

The raid yielded the largest seizure out of 20 recent raids.