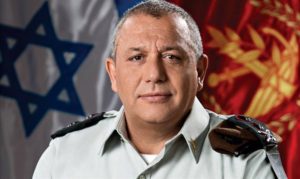 Israel Defense Force (IDF) chief-of-staff Lt. Gen. Gadi Eizenkot told the Saudi-owned Elaf newspaper that there is a “complete consensus” between Israel and Saudi Arabia on the issue of mutual arch-rival Iran, and that Jerusalem is ready to share intelligence with one of the world’s most powerful Muslim states.

Israel and Saudi Arabia have never had diplomatic ties and Riyadh has long been in unison with the rest of the Middle East in hewing closely with the Palestinian cause, a cornerstone of Arab solidarity.

Yet shared anger at the 2015 Iranian nuclear accord has chipped away at their historic animosity, and the interview suggests Israel has picked a side in the swelling feud between Shiite Iran and Sunni Saudi Arabia over the former’s influence in Lebanon, Yemen and Bahrain.

Eizenkot, who is the first senior Israeli military officer to be interviewed by a Saudi media outlet, called Iran the “biggest threat to the region” and said that Israel and Riyadh are in complete agreement about Iran’s intentions to dominate the Middle East.

“With [US] President Donald Trump there is an opportunity for a new international coalition in the region,” he was quoted as saying. “We need to carry out a major and inclusive regional plan to stop the Iranian threat.”

“We are ready to exchange experiences with moderate Arab countries and exchange intelligence to confront Iran,” he added.

When asked if information sharing was already underway with Saudi Arabia, he responded that “We are ready to share information if necessary. There are many common interests between us and [Saudi Arabia].”

Echoing a refrain often used by Israeli political leaders, he argued that Iran wants to take control of the Middle East by creating a Shi’ite crescent, “from Lebanon to Iran and then from the Gulf to the Red Sea.”

“We must prevent this from happening,” he implored.

Saudi Arabia’s ambitious deputy ruler, Crown Prince Mohammed bin Salman, threw a match onto the tinderbox of Lebanese politics on November 4 with the reportedly engineered resignation of the country’s prime minister, Saad Hariri, who was on an official visit to Riyadh.

He cited Hezbollah’s “grip” on the country and Iran’s ambitions for total control.

When Huthi rebels fired a missile at Riyadh the same evening, Saudi Arabia’s leaders blamed Iran and Hezbollah, calling it an “act of aggression”.

The incident sparked speculation that the Saudis wanted Israel to launch an attack on Hezbollah.

However Eizenkot said in the interview that Israel has no intention of initiating a conflict with Iran’s Lebanese proxy Hezbollah, saying that “I am very happy for the calm on both sides of the border, which lasted for 11 years.”

“On the other hand, we see Iranian attempts at bringing about an escalation, but I don’t see a high chance for this at the moment.”

“I see that Hezbollah is beginning to feel financial pressure,” he said, “and is starting to get into serious material problems and we see a decline in support for Hezbollah.”